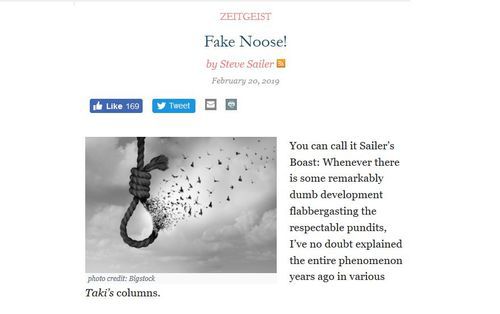 You can call it Sailer’s Boast: Whenever there is some remarkably dumb development flabbergasting the respectable pundits, I’ve no doubt explained the entire phenomenon years ago in various Taki’s columns.

For example, the sidesplitting Jussie Smollett fake noose story is a classic example of the Hate Hoax phenomenon that I’ve been explicating since 2004. So, I’m going to take another victory lap to review what I’ve figured out about hate hysteria over the past fifteen years.

Noosehound: A journalist or activist is who always ready to believe in the latest hate hoax.

What #Jussie Smollett did was a genuine hate crime. It exacerbated racist hate against whites.

It was fairly elaborate false flag, involving a paid conspiracy, props, and a rehearsal. The instigator sees himself as a political sophisticate friendly with a Presidential candidate

By the way, there is a lot of talk on the right about how Jussie will of course face no legal consequences. But my 2004 article “Hate Hoax” was about a leftist professor at Claremont McKenna college who tried to frame her white male students for trashing her car (which she did herself).

She went to prison for it.

Granted, Jackie Coakley of the UVA Haven Monahan gang rape on broken glass hoax paid virtually no price (Rolling Stone, however, has paid out a few million dollars to its victims in civil suit settlements). But Coakley had the native cunning to refuse to ever speak to the police about her story. (By the way, wouldn’t Jackie be a good example of what an iSteve commenter called “toxic princessity?”) It’s apparently legal to tell Rolling Stone whatever it desperately wants to hear, but don’t lie to the cops.

I’m not a lawyer, but if I were, I’d advise anybody out there considering staging a hate hoax: Don’t do it. There are a whole lot of laws on the books and one of them might be used against you.

According to the late prosecutor Vincent Bugliosi, cops and prosecutors expect perps to lie in their own defense and seldom prosecute them for that … if they get a conviction on the main charge.

(Of course, as Alger Hiss found out, if you skate on your main crime, in his case due to the statute of limitations, you can still go to prison for perjury.)

But when you make up a crime, it cuts into their donut time. And the law enforcement system can take that pretty seriously if they don’t like the look on your face.

By the way, considering how the Statue of Liberty has been hijacked to stand for the Zeroth Amendment (“Immigration Uber Alles”), we should erect in San Diego a 500′ tall Statue of Limitations with a poem on it reading:

Sorry, America is full,
We don’t need any of your bull.

Anyway, to paraphrase Wordsworth on Milton in 1802;

Tom Wolfe! thou shouldst be living at this hour

Anyway, read the whole thing there.