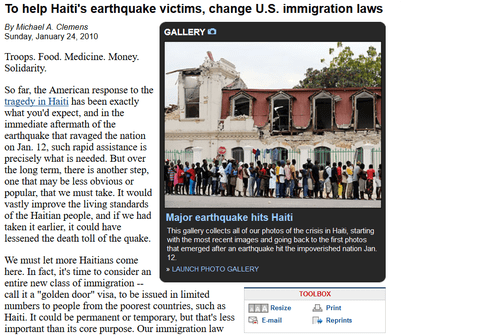 They are dead serious about this.

On Sunday, hard on the heels of the Elliott Abrams demand that large quantities of Haitians be imported because of the earthquake, The Washington Post did it again.

We must let more Haitians come here. In fact, it's time to consider an entire new class of immigration — call it a "golden door" visa, to be issued in limited numbers to people from the poorest countries, such as Haiti.

We…know… why many individual Haitians are poor. For a large number, there is a clear reason: Many have been willing and able to leave Haiti for American shores, but armed agents of the U.S. government have forcibly stopped them or deterred them from trying….For this reason, the United States is complicit in the agony many Haitians are now suffering.

As usual, there is little consideration of - and no sympathy at all about - the impact this would have on the way of life of those selfish brutes who have the temerity to be Americans.

while most economic studies find that such immigration may have lowered the wages of U.S. high school dropouts by a few percentage points, many of those dropouts are immigrants themselves, already earning far more than they would in their country of origin

(This is a very dubious assertion factually.)

Michael Clemens appears to be building a career as a professional open borders apologist. Ask him why he cares so little about the welfare of Americans. (Here is his Georgetown email as well.)

As I noted yesterday, the eerie thing about this campaign is how well co-ordinated it is. After two days doubtless spent grinding his teeth with rage, the redoubtable Larry Auster has published his promised analysis of the Abrams Op-Ed. He could be equally be writing about the Clemens article:

By Abrams's altruistic reasoning, we should admit, not just a million Haitians into America, but also 1.5 million people from each of those (poorer, African -VDARE.com) eight countries into America. That is, we should immediately allow into America 13 million blacks, increasing America's black population from the current 35 million to 48 million. We should turn America into a workers' transit hotel for the poorest countries on earth.

Unfortunately, it is not just the Neocons we need to fear here — it is the wishes of the Obama Administration with which they are currying favor. The appearance of basically the same article twice in three days in a leftist bastion like The Washington Post means one thing: this crazy piece of treason has powerful backers.

The Rasmussen Poll on importing Haitians found that a stunning

Thirty-seven percent (37%) of Americans nationwide say they or someone in their family have contributed money, goods or services to help the earthquake victims,

With this tide of sentiment running, and the MSM helping, no wonder they are hopeful. Remember what followed 9/11?—the invasion of Iraq, completely unrelated but another long-standing neocon goal.

America is in danger.