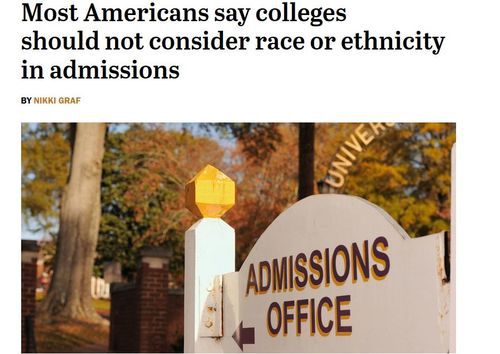 NEW: As the debate over college admissions policies reignites, 73% of Americans say colleges and universities should not consider race or ethnicity when making decisions about student admissions. https://t.co/yP61WeDbZP

College admission quotas have been unpopular with the public in opinion polls for as long as I can remember. But affirmative action has been near universally backed by college administrators since 1969.

Perhaps this is because the public doesn’t realize how large the racial IQ gap is, while college insiders are, deep down, more race realist about IQ?

For example, James D. Watson recounted in his 2007 book Avoid Boring People an interesting conversation he had in 2006 with Harvard’s interim president, 77-year-old Derek Bok, who had returned to the top job temporarily after the purging of Larry Summers for crimethink. The then 77-year-old Derek Bok, the son-in-law of famed Swedish socialist economist Gunnar Myrdal, is the co-author of a popular book defending affirmative action a.k.a. quotas in college admissions, The Shape of the River. As I wrote in VDARE:

The end of Avoid Boring People centers upon an April 2006 meeting between Watson and the post-Larry Summers interim president of Harvard, Derek Bok, who had also been president when Watson was a professor there in the 1970s.

“Before leaving Derek’s temporary office I remarked that the time was surely not far off when academia would have no choice but to hand political correctness back to the politicians. Since 1978, when a pail of water had been dumped over [Harvard sociobiologist] E.O. Wilson for saying that genes influence the behavior of humans as well as of other animals, the assault against behavioral science by wishful thinking has remained vigorous.”

Watson, the first head of the Human Genome Project, who was honored in May by having his entire genome sequenced and published online, then notes something that I’ve been pointing out here on VDARE.com for some time: The countdown has already begun to the final understanding of the genetic underpinnings of IQ differences. He says:

“In showing that human genes do matter, behavioral biologists will no longer be limited to comparisons of fraternal and identical twins. Soon the cost of sequencing the A’s, T’s, G’s, and C’s of individual DNA molecules will drop to a thousandth of what it has been, thereby transposing our studies of behavioral differences to the much more revealing molecular level.”

As the countdown proceeds, the hysteria will only mount on the part of those who want to cover up the findings.

In his book’s penultimate paragraph, Watson raises The Forbidden Subject:

“A priori, there is no firm reason to anticipate that the intellectual capacities of peoples geographically separated in their evolution should prove to have evolved identically. Our wanting to reserve equal powers of reason as some universal heritage of humanity will not be enough to make it so.”

Watson then foresees the gibberish and lies that he has had to endure over the last week:

“Rather than face up to facts that will likely change the way we look at ourselves, many persons of goodwill may see only harm in our looking too closely at individual genetic essences.”

(Here, Watson, a famously ornery son-of-a-gun, shows some unexpected—and, sadly, undeserved—graciousness in referring to his future demonizers as “persons of goodwill”.)

Watson ends his autobiography with a brief but telling exchange with then-acting Harvard president Bok:

“So I was not surprised when Derek asked apprehensively how many years would pass before the key genes affecting differences in human intelligence would be found. My back-of-the-envelope answer of ‘fifteen years’ meant Summers’s then-undetermined successor would not necessarily need to handle this very hot potato.

Upon returning to the Yard, however, I was not sure that even ten years would pass.”