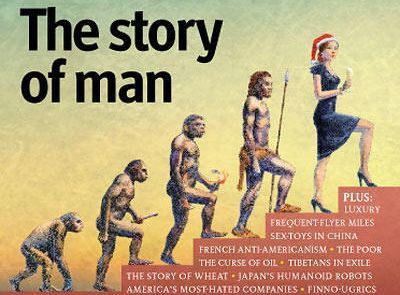 The ECONOMIST On Evolution: Survival Of The Unfit To Print The centerpiece of The Economist magazine's year-end double issue (Dec. 24, 2005 to Jan. 6, 2006) is a 12 page survey entitled "The story of man." The cover cartoon showing human evolution from the knuckle-dragging ape to the apparent ultimate in human perfection—which the magazine's artist seems to conceive of as starlet Scarlett Johanson in a little black New Year's Eve party dress holding a champagne flute. (I can't say I disagree…)

But when he turns to race in his otherwise well-done essay, The Economist's science editor Geoffrey Carr can't keep his story straight even on the same page.

Thus at the bottom of p. 11 of the survey, Carr commends the theory of how the high average intelligence of Ashkenazi Jews might have evolved over just the last millennium, which was published in 2005 by Gregory Cochran (Carr compares him to Darwin!) and Henry Harpending.

"Until a century or two ago, the Ashkenazim—the Jews of Europe—were often restricted by local laws to professions such as banking, which happened to require high intelligence. This is the sort of culturally created pressure that might drive one of Dr. [Terrence] Deacon's feedback loops for mental abilities … If Ashkenazi Jews need to be more intelligent than others, such genes will spread, even if they sometimes cause disease."

(Bear in mind that this theory hasn't been proven—Cochran and Harpending have proposed an empirical test for it, but it hasn't been carried out yet. Scientifically, though, it's at least possible for important traits like intelligence to evolve that fast, as the celebrated Harvard cognitive scientist Steven Pinker has recently acknowledged.)

Yet, earlier on the same page, Carr enunciates one of the sillier versions of the "Race Is Only Skin Deep" smokescreen that I've seen recently:

"… geneticists have failed to find anything in humans that would pass muster as geographical races in any other species….The only 'racial' difference that has a well-established function is skin color. … As to other physical differences, they may be the result of founder effects [i.e., caused by random variation among the handful of progenitors of a group] or possibly of sexual selection, which can sometimes pick up and amplify arbitrary features."

This is absurd. It's obviously contradictory for Carr to write both that

And it's also simply not true, as John Goodrum's "Race FAQ" has exhaustively shown.

You would think that some editor would notice this glaring conflict and ask his writer to resolve it. But the topic of race routinely induces Brain Shutdown Mode even among smart journalists.

In his Economist essay, Carr says:

"In fact, one of the striking things about Homo sapiens compared with, say, the chimpanzee is the genetic uniformity of the species."

Here, The Economist appears to be falling prey to the common confusion between neutral (a.k.a., "junk") genes that don't do anything and functional genes. Chimpanzees are much older as a species than modern humans. So they've had millions of years to accumulate random mutations of DNA that serve little purpose.

But humans in fact show an extraordinary range of physical diversity for a single species—probably due to our colonizing so many different continents. Prominent Berkeley molecular anthropologist Vincent Sarich concludes:

"I am not aware of any other mammalian species where the constituent races are as strongly marked as they are in ours… except those few races heavily modified by recent human selection; in particular, dogs."

Embarrassingly for The Economist, two days before Christmas came a landmark paper by Robert Moyzis, Eric Wang, et al. entitled "Global landscape of recent inferred Darwinian selection for Homo sapiens" [PDF]. It lists 1,800 genes that have been under varying selection pressure in Africa, Europe, or East Asia over no more than the last 50,000 years.

University of Wisconsin anthropologist John Hawks writes in his blog:

"It would be hard for me to overstate how important this paper is... it brings home the vast importance of adaptive change during the most recent parts of human evolution."

"A detailed look at human DNA has shown that a significant percentage of our genes have been shaped by natural selection in the past 50,000 years, probably in response to aspects of modern human culture such as the emergence of agriculture and the shift towards living in densely populated settlements…

"This analysis suggested that around 1800 genes, or roughly 7% of the total in the human genome, have changed under the influence of natural selection within the past 50,000 years… That is roughly the same proportion of genes that were altered in maize [corn] when humans domesticated it from its wild ancestors. Moyzis speculates that we may have similarly 'domesticated' ourselves with the emergence of modern civilization.

"'One of the major things that has happened in the last 50,000 years is the development of culture,' he says. By so radically and rapidly changing our environment through our culture, we've put new kinds of selection [pressures] on ourselves.'"

The classic example of these "new kinds of selection pressures": the cultural practice of milking domesticated animals resulted over the last ten thousand years in a selection for lactose tolerance in adults. This drove the frequency of the gene variant for the ability to digest milk from close to zero to over 90 percent in Northern Europe—versus no more than ten percent in modern East Asia. In turn, this new genetic capability had a big impact on Northern Europe's cultural traits, including population density, economy, lifestyle, and cuisine.

"Genes that aid protein metabolism—perhaps related to a change in diet with the dawn of agriculture—turn up unusually often in Moyzis's list of recently selected genes. So do genes involved in resisting infections, which would be important in a species settling into more densely populated villages where diseases would spread more easily. Other selected genes include those involved in brain function, which could be important in the development of culture."

Greg Cochran, who has been reviewing Moyzis's database, tells me that right now we only have a vague idea what most of these 1,800 genes do. It will take years to figure out the uses of each one.

But, he notes, there is certainly no reason to assume that the varying demands of natural selection in different parts of the world have ignored genes that impact cognition and personality.

Cochran also says this list of 1,800 genes is just the start. More refined methodologies should uncover more in the future.

The conventional wisdom on virtually all sides of the political spectrum demonizes anyone who tries to talk about the new DNA research. The reigning intellectuals fear that their ideologies will be shattered by the new knowledge—with catastrophic results, certainly for their own careers, but possibly for all humanity.

And yet, is this scientific knowledge truly as terrifying as the conventional wisdom assumes? Don't we already know that both people and peoples tend to be somewhat different? And don't we deal with these realities every day, generally in a constructive manner?

For example, if you have more than one child, you've no doubt noticed that they are surprisingly different genetically. And yet that doesn't plunge you into despair. (Well, sure, sometimes your kids' squabbles over their different tastes get on your nerves, but you survive.)

Meanwhile, other families might notice common characteristics shared among you and your children that they themselves don't possess.

But that doesn't mean your family and their families are doomed to a war of annihilation.

The same is true for racial groups, which are simply extended families that have attained some degree of coherence due to partial inbreeding.

And, while this virulent campaign in favor of ignorance can slow scientific research, it can't make it go away.

Even more importantly, it can't make the underlying reality of human diversity disappear.

What the human race needs is a new perspective that assimilates the latest genetic discoveries into a sensible, humane, practical-minded, and realistically optimistic whole.

But we're not going to get that from the purveyors of the conventional wisdom—which, for all its merits, here includes The Economist, not for the first time.