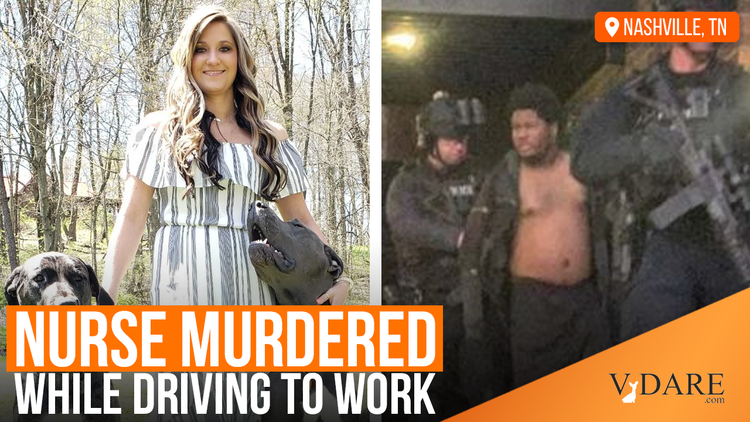 Driving While White: ICU Nurse "Randomly" Murdered on Her Way to Work by Black Career Criminal

You never know what story will “red pill” an individual.

Mine was a friend from my youth, her story haunting me to this day.

Were white privilege real, we’d all know her name.

And odds are, someone out there is friends with Caitlyn Kaufman. And they’ll never forget how she died and who murdered her.

Worse, the silence surrounding her death.

Her Name is Caitlyn Kaufman.

A tip from a concerned citizen led to the arrest of a man in connection with the murder of 26-year-old Tennessee nurse Caitlyn Kaufman.

Kaufman was in her vehicle on the way to work an overnight shift in the ICU at St. Thomas West Hospital Dec. 3 when she was shot multiple times.

Metro police do not believe Kaufman knew the suspect prior to her death.

Hill was taken into custody without incident. He was taken to Metro police headquarters where he was interviewed by detectives assigned to the case.

According to Chief Drake, Hill made statements to the detectives that implicated him in Kaufman’s murder.

The tip implicating Hill in Kaufman’s murder came into police within an hour of Thursday’s announcement that the reward for information had increased to more than $65,000, $50,000 of which was donated by a coalition of Nashville business owners and entrepreneurs.

“I understand many of those persons involved in the reward are dads who have families in Nashville and love Nashville deeply. I thank them for their contributions,” explained Chief Drake.

A concerned citizen came forward Thursday afternoon, identified Hill as a suspect and provided information on the whereabouts of the 9mm gun used in Kaufman’s murder, according to Chief Drake.

Chief Drake said detectives located the gun and it was immediately inspected by forensic analysists. Analysists also test fired the gun at the crime lab and determined it was a 100% match to the three shell casings found along Interstate 440 the night Kaufman was killed.

Electronic experts were able to identify Hill’s cell phone number and provider, which detectives used to determine he was in the vicinity of the murder scene the night Kaufman was killed.

“While it was a relief to be able to sign the arrest warrant naming Hill at 3:37 [Friday] morning, it was an exceptional relief to be able to call Caitlyn’s mother Diane in Pennsylvania … to tell her that an arrest had been made,” lead Detective Chris Dickerson said. “Throughout this investigation, we have felt the support of all of Nashville, and the strong support of the Kaufman family.”

Diane Kaufman returned to her home in Pennsylvania from Nashville Thursday to prepare for Caitlyn’s funeral Saturday.

Hill was booked into the Downtown Detention Center on a criminal homicide charge. He is being held without bond pending a hearing.

We aren’t supposed to notice, as no corporate media outlet documents their lives. How they lived, and ultimately how they died.

Those who do are digitally tarred and feathered, deemed “racist” for engaging in pattern recognition.

Her Name is Caitlyn Kaufman.

Were white privilege/systemic racism/implicit bias/or the need for the grotesque Black Lives Matter movement real, you’d never be free of hearing of the name of Caitlyn Kaufman or how she died. Or the black career criminal who randomly murdered her.

Instead, you get a clear cut case of black privilege in the silence surrounding her murder.