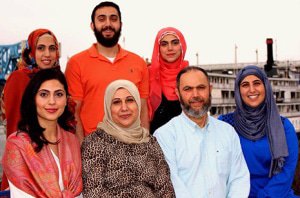 Down The Memory Hole (contd.): Why Is No-one Asking How Mohammod Youssuf Abdulazeez' Parents Got To U.S.?

We headed our article on the July 16 Chattanooga shootings Down The Memory Hole? ANOTHER Immigrant Mass Murder—Muslim Gunman From Kuwait Kills Unarmed Marines  and that's exactly what has happened: for example, Sunday show wrap-up: Iran deal dominates, The Hill, July 19, 2015.

What MSM coverage continues seems to be focused on the seemingly redundant question of Abdulazeez' motive, ominous because our hostile elite  may sense a Confederate Battle Flag-style chance to shut down the internet [Online jihadist propaganda may have inspired Tennessee gunman, by Mark Hosenball, Reuters/ Bangor Daily News, June 20 2015]. (n.b. "Tennessee gunman"!)

But there seems to be no MSM effort to ask the obvious question: how did Abdulazeez' parents get into the U.S. in 1996?

I hate to speculate, but will anyway. There is a chance that this family was very likely among those being expelled from Kuwait (to Jordan) at the time of the first Gulf War. The father is reportedly a Palestinian who could very well have been a successful asylum seeker just as had been the father of the Tsarnaev Boston Bomber family. In the Tsarnaev case the father got into the US on his own and then asked for asylum. Once granted political refugee status he then brought the rest of the family over.

By the way, we wouldn’t be speculating if the US State Department and its resettlement agencies in Tennessee would talk!

how Nakoula, Sirhan Sirhan, the 9/11 terrorists, Aunt Zeituna, the Egyptian terrorist who murdered two Jews at the El Al counter at LAX on July 4, 2002, and other notorious immigrant screwups got in the country in the first place and didn't get kicked out.

But that might raise questions about the Refugee Racket—and Muslim immigration.