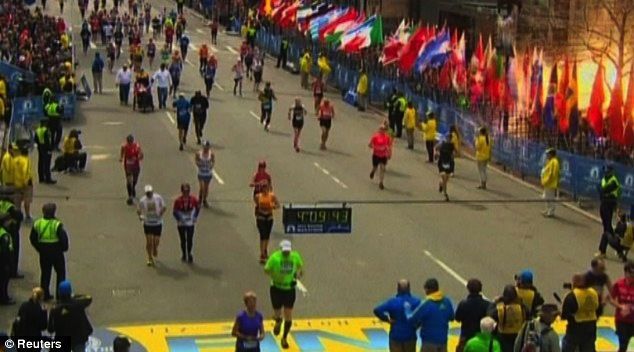 Time for a National Immigration Safety Board

In the Boston Marathon bombing, one Chechen terrorist is dead and his brother is holed up in Watertown. NBC News claims they have been in the country for one year and are legal residents of Cambridge, MA.

The only interesting question is the one that never seems to have occurred to the NYT's half-dozen newshounds: Why is this guy in my country? Why was he let in? Why wasn't he deported after one of his previous offenses? ...

You know how Global Warming is something that We Must Do Something About Now? Well, Sam Bacile's immigration isn't like that. It's more like Continental Drift — just something we have to live with, cuz whaddaya whaddaya?

In September I wrote about Sam Bacile:

There has been virtually no debate over why is this guy in the country anyway. Is he a citizen? Does he have a green card? Why wasn't he deported during his long chain of crimes? If he is a citizen, what breakdowns in the system allowed for him to become one? How does the American immigration system let in the dregs of the whole world like Nakoula?

Our reigning mindset doesn't let us ask any such obvious questions. What's more important to talk about is how you and I better dummy up to avoid offending mobs in some country Obama decided to bomb on a whim.

You know how there's a National Transportation Safety Board that investigates airline crashes? It's independent of the Federal Aviation Administration and other organizations to prevent conflicts of interest. The idea is that figuring out why one airliner went down is important not just in that particular case but to figure out how to prevent future airliner crashes.

What we need is a National Immigrant Screwup Board that investigates how Nakoula, Sirhan Sirhan, the 9/11 terrorists, Aunt Zeituna, the Egyptian terrorist who murdered two Jews at the El Al counter at LAX on July 4, 2002, and other notorious immigrant screwups got in the country in the first place and didn't get kicked out.

If conman/drug dealer Sam Bacile didn't do it for you, the Tsarnaev brothers of Chechnya ought to.