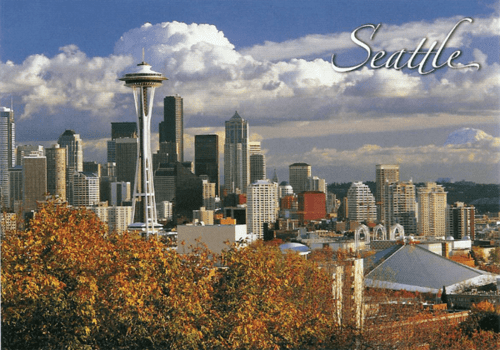 In the Seattle area, the Boeing aircraft manufacturing company has long been a big player in the local economy. Now the firm is expanding the use of robots in building airplanes, and though it promises that nobody will lose their jobs any time soon, we can see the long-term trend: more robots, fewer human workers.

And that trend has been studied by experts, who say we’re at the beginning of a workplace revolution that is making human workers obsolete for many tasks. Two Oxford University researcher opined in a 2013 paper that nearly half of American jobs are vulnerable to automation in the next 20 years. The Gartner tech consulting company predicts that one-third of jobs will be performed by smart machines in 2025, one short decade from today. Certainly the jobless recovery is at least partially due to the increased efficiency via technology that businesses employed to survive the recession.

At this point, companies really have no choice but to adopt the new automated technologies. When competitors are getting seriously improved efficiency and therefore cost savings from robots, then everyone has to go that way. Boeing is competing with Airbus, and the whole industry is moving to automation.

It’s similar to when one builder in town hires cheapie illegal aliens and can underbid jobs by 30-50 percent, then other contractors are forced into Mexican labor also, or lose everything.

Given these fundamental workplace changes causing current and future job reduction in the millions, it makes no sense to continue importing immigrant workers because of a mythical labor shortage caused by the retirement of the boomer generation. In fact, given the automation revolution, the correct number of immigrants is ZERO. 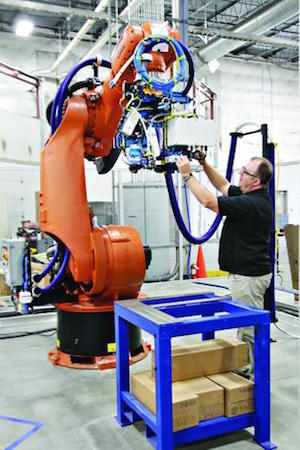 At an Everett industrial park, in a space smaller than the average Safeway, one of the world’s largest robotics companies and Boeing are inventing the future of aircraft building.

There, orange robotic arms bend and pivot in a mechanized dance.

The machines have been operating for weeks to test an automated system that will drill and install 50,000 fasteners on the fuselage of each new Boeing 777 — and even more on the upcoming 777-9X. Today those fasteners are installed by hand.

The 777X is the newest and largest of a trio of airplanes — along with the 787 and 737 — that will drive most of Boeing’s profits for years to come. As it fights with Airbus for every sale, Boeing is placing a big bet on robots to cut costs.

“It’s the way they’ve got to go,” said Scott Hamilton, president of Leeham LLC, a Seattle-area aerospace consultancy. “As they move into 777X and they automate the line, it’s long overdue.”

When the system is running, twin robot arms mounted on the machine’s self-driven, wheeled platform will slowly creep along the inside of the fuselage. At the same pace, a crawler outside the fuselage will aim a corresponding arm at the plane’s exterior.

“Think of it like a sewing machine,” said Jason Clark, vice president of 777 operations.

Today, jets are mostly “sewn” together by hand.

It was only two years ago that Boeing took initial steps toward automation, including a system to drill (but not fasten) sections of the fuselage, and another to robotize the painting of wings.

Like Boeing, Airbus also has been far behind the automotive world in terms of robotics, Hamilton said, but now the A320 line in Hamburg, Germany, is “much more filled with robotics.”

The orange robots on which Boeing’s future depends are built and engineered by KUKA, a German company with deep roots in creating robots to build cars.

In September, KUKA opened up the 30,000-square-foot facility in Everett — a high-ceilinged R&D center about two miles north of Boeing’s sprawling aircraft plant. There it will work with Boeing and crack into the broader aerospace market.

“It’s our goal to support the Western region of the U.S. out of this facility,” Bob Reno, group vice president of aerospace for KUKA Systems, which is based outside Detroit.

KUKA Systems is a unit of KUKA AG, a German company that generated $2 billion in revenue last year.

The focus of KUKA’s work for Boeing is the 777X, the radically upgraded wide-body jet with new engines and carbon composite wings. But adapting the KUKA technology from autos to airplanes is a momentous job.

A 777X will weigh 400 times as much as the typical car. And while 60 autos an hour commonly race down the assembly line, 777s are now moving through the Everett plant at 8.3 jets a month.

As part of the current 777 assembly process, a mammoth blue structure in the Everett factory turns sections of the giant fuselage upside down, so workers can get access to one section at a time.

But robots, unlike humans, can work at any angle without discomfort.

So Boeing and KUKA have been collaborating since at least 2013 to revolutionize the building of the 777. To do this, Boeing leased a large boat-building facility in the seaside town of Anacortes to test out KUKA robot concepts.

The result is a technology Boeing calls FAUB, for “fuselage automated upright build.” It will enable fuselages to stay upright during the entire production process, saving time and money.

During a May visit to KUKA’s Everett facility, the technology was so advanced that a nearly complete robotized drilling and riveting machine was almost ready to be delivered to Boeing.

Boeing learned the hard way, from the crippling 787 Dreamliner delays, to avoid introducing a new-technology aircraft and a new way of building it at the same time.

So the Everett factory is changing over to the new 777 process in two steps.

Not until the KUKA robots run flawlessly on the primary line will Boeing introduce the new and longer 777-9X fuselage.

“What we’re trying to do is pull ahead the production system changes we will need for 777X onto the 777,” said Elizabeth Lund, 777 vice president and general manager. “It allow us to get some benefits earlier.

“But much more important than that,” she added, “it allows us to do it in a de-risked way to work out bugs on new technologies we’re bringing in, while continuing with the current build.”

Boeing executives consider the transfer of 777 production to robots among the most challenging transformations they’ve ever attempted. They need to get it right.

“The production line, running at 8.3 (planes a month), is one of the gems of the company,” said Clark. “We have to be sure we protect it very well.”

KUKA’s Reno is under similar pressure, because he hopes that success with the 777 will lead to more work with Boeing, and further down in the supply chain to the companies that build parts.

“It’s not only Boeing looking at automating their build processes — it’s the industry,” he said. “If that supplier can find ways to automate, they can improve quality, improve lead time, reduce costs.”

To make more room for the robot phase-in, Boeing is completing a 325,000-square-foot structure in a corner of the Everett plant, which it’s calling a Fuselage Assembly Center.

While automation clearly will replace some people, the fact that Boeing is increasing production and opening a second temporary 777 line in Everett means that nobody will lose their jobs any time soon, Boeing executives insist.

But from the viewpoint of the Machinists union, which represents the mechanics who build the 777, the future looks less certain.

“We’re concerned for sure that automaton absolutely takes away the jobs we do manually,” said Jon Holden, president of Machinists District Lodge 751. “Those jobs are tough, hard and dirty — but we value those jobs, we don’t want to get rid of those jobs. If anything, we’d like to make those jobs safer.”

Boeing maintains that robots will relieve people from some of the most repetitive jobs.

“When you do that work, it’s really hard on the shoulders and the body’s mechanics,” Boeing’s Clark said. “We’d rather move mechanics into positions where they’re running equipment to do that kind of work.”

Boeing wields its robots to fend off rivals

Boeing jets are sold out at least seven years ahead, so top execs have shifted their focus to harnessing robotics to build those aircraft as inexpensively and reliably as possible.

“Our imperative is to deliver on a record backlog of more than 5,700 airplanes, with an intense focus on profitability,” said Boeing CEO Jim McNerney during a May conference.

The bet is that technology can keep down factory costs and therefore prices on the upcoming 777X. The largest of the series, the 405-passenger 777-9X, now lists for $389 million.

Cutting costs through automation is not only crucial to compete against Airbus. It’s also critical to fending off emerging challengers such as the Commercial Aircraft Corp. of China, which is working to build a near-clone of the Boeing 737, and which pays far-lower factory wages than Boeing.

If Boeing were to lose market share to these rivals old and new, the result could be fewer jobs in the Puget Sound region.

“I think (factory cost-cutting) is very pivotal,” said Scott Hamilton, president of Leeham LLC, a Seattle-area aerospace consultancy. “Boeing has been extremely good about lean manufacturing; in some ways they were ahead of Airbus on that.”

Automation is the next essential step, Hamilton added.

“The more gains we’re going to see through the automation process of fuselage assembly,” Conner said, “this is a big benefit from a productivity standpoint and a quality standpoint.”