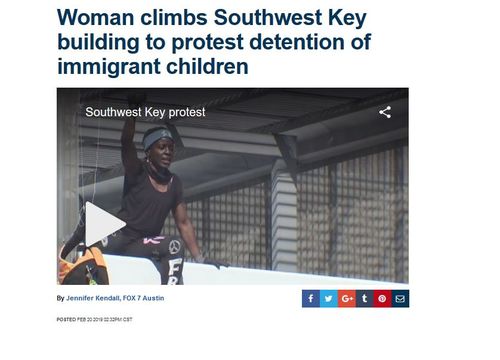 Do We Really Need These People? Congolese Lady Launches Another Anti-American Protest

Therese Okoumou is a Congolese woman who, for some reason, is in our country. If there is one country in the world that is not in a position to preach to us, it's the Democratic Republic of the Congo. Yet Miss Okoumou has made it something of a crusade to campaign against the very existence of the United States.

Last July 4, she got the Statue of Liberty shut down after she climbed it in protest of immigration law enforcement. She then showed up to her court hearing (where she was represented by Michael Avenatti) wearing a shirt that said, "No human is illegal on foreign land." Most media outlets did not report this little fact. As Jared Taylor pointed out in a recent video, the "stolen land" trope essentially serves as a declaration that the United States of America itself is illegitimate. She then proceeded to call Americans "drug addicts" and "motherf***ers."

Now, even though she's coming off a criminal conviction for her last protest, Miss Okoumou is at it again.

An activist is back on the ground after climbing a building in East Austin. Patricia Okoumou climbed on top of the Southwest Key building to protest the detention of immigrant children.

Okoumou is reportedly the same one who climbed the Statue of Liberty over the summer.

Patricia Okoumou jumped from the second floor of the SW Key building around 8 p.m. She was taken to a hospital to be checked out and then will be charged with trespassing and taken to jail.

Presumably, she will once again get top flight legal representation and be back it once she gets another slap on the wrist.

Yet it's not really about Okoumou. No self-respecting country, let alone a "superpower," would import people who not only bring nothing to the country, but actively hate the people who live here. Why isn't this woman deported? Why aren't foreigners who openly declare their hatred for the nation sent away? After all, Congo is no longer under the rule of Belgium, so why did she deliberately come here to live under the rule of the white people she evidently hates so much?

The motivation for many open borders supporters is not love for immigrants. It's hate for Americans. Americans need to have some shred of self-respect and stop tolerating it.