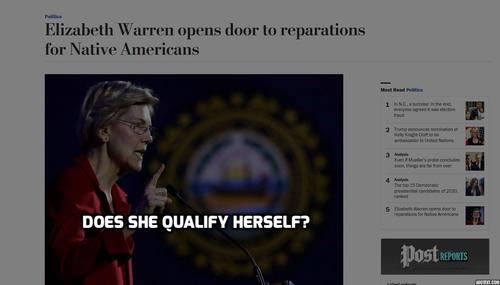 "Elizabeth Warren Opens Door To Reparations For Native Americans"—Does She Qualify Under Her Own Plan?

MANCHESTER, N.H. — Sen. Elizabeth Warren said Friday evening that Native Americans should be “part of the conversation” on reparations, showing a willingness to expand the debate over whether minority groups that have faced discrimination should be financially compensated by the federal government.

Warren is one of four Democratic presidential hopefuls who have said in recent days that they’re open to providing some type of reparations to African Americans who are descendants of people who were enslaved in the United States, although they’ve offered varying levels of details about how the goal would be achieved.

She doesn’t seem to have a politician’s needed knack for knowing when to change the subject and answer a different question than the one asked.

This ground is fraught for Warren, who claimed to be Native American for about two decades when she was a law professor. She has apologized for doing this, but the issue dogged her in her first Senate race and has been a persistent source of tension in her nascent presidential bid.

… Warren did not talk about reparations as part of her address. She recently told the New York Times that she would support the concept. Sen. Kamala D. Harris (D-Calif.) and former housing and urban development secretary Julián Castro both have said in vague terms that they support reparations for black Americans. Self-help guru Marianne Williamson has offered a detailed plan to give black Americans $100 billion.

Does Kamala qualify under Kamala’s reparation plan? Does Liz under Liz’s? These are giant tar pit issues for Democrats since they get everybody thinking about existing affirmative action programs and immediately thinking about fraud. (What almost nobody realizes about affirmative action is that there isn’t as much race fraud as you’d expect … because modern white people, Warren excepted, are pretty honorable about race.)