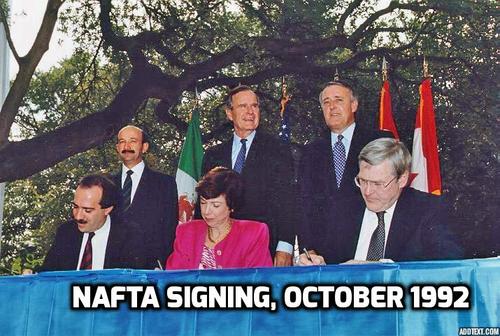 Now that George H.W. Bush's funeral rites are almost (surely?) over, perhaps I might be allowed to politely mention the obvious: he was a catastrophe for his party and his country. The great free market economist Milton Friedman scathingly outlined some reasons in his August 1992 interview with me ("I believe he has been very close to a disaster"--note that Friedman anticipated Bush would not be re-elected). This was a sad contrast to Friedman's post-Reagan optimism in our earlier 1988 interview.

One reason Bush was a catastrophe that I did not discuss with Friedman: immigration. Here I draw on another conversation, this time with Brian Griffiths, Chief Policy Adviser to Britain's Prime Minister Thatcher, held in about 1990 and never previously published.

Griffiths had just come up to New York from Washington D.C., where he had met with Bush officials. He told me with amazement that, while talking about the then-ongoing NAFTA negotiations with Mexico, they had calmly told him that, in order to allay Mexico's fears that removing its corn price supports would massively displace agricultural workers, they had privately assured the Mexican officials that the U.S. was prepared to tolerate an increase in illegal immigration.

This, of course, was the absolute opposite of the line that the Bushies were feeding gullible Conservatism Inc. ideologues: they were being assured that free trade would expand Mexico's economy and reduce illegal immigration.

Note that, from a strict free market point of view, the Bush negotiators shouldn't have cared whether the Mexicans had a corn price support program anyway. It would just redistribute income within Mexico at a cost to the Mexican economy, not the American. For that matter, why have free trade negotiations at all? What is there to negotiate about? Why not go to unilateral free trade--if you believe in free trade?

This actually came up in my 1988 interview with Friedman. He said:

The Bush negotiators aimed at "managed trade." American agribusiness, big donors but notoriously self-interested and shortsighted, wanted to disable its competitors and clear its path to Mexican corn consumers. So the Bushies did it for them.

This is a huge scandal. It means the NAFTA Treaty that Bill Clinton ultimately got through the U.S. Senate was not the real agreement—there were secret codicils. Who did this? Were there other such codicils? What did President Bush (and President Clinton) know and when did they know it?

No-one, needless to say, cared about the looming prospect of Mexifornia. Why not? Friedman said, on the basis of personal observation, that Bush did not appear to be particularly intellectually active. So maybe it was just lack of imagination. Maybe nobody ever talked about the subject at the country club.

But I instinctively prefer Steve Sailer's theory: the Bushes' dynasty has long been attracted to the life-style of the Mexican oligarchs with whom it has surprisingly intimate relationships (except when members of the latter are in jail or exile) and simply wanted to reproduce it in the U.S. A hemispheric common maket, with free movement of labor, good and capital, would mean an America of slums and gated communities. But the Bushes were fine with that. They already live in gated communities.

There's some sentimentality now about the WASP elite, now that their power appears broken. But (speaking as an immigrant WASP myself) the coldness, selfishness and snobbery that went along with their superfical politesse should not be forgotten.

Nor should the fact that they, George H.W. Bush prominent among them, presided over—or at least made no effort to resist—the post-1965 immigration disaster, which is on the verge of making the U.S. a Third World society. As in the parallel case of Britain, this was, ultimately and notwithstanding Bush's distiguished war service, a species of treason. Somebody should appoint a Special Prosecutor.