I’ve been writing since February 1 about possible race differences in the prevalence of Covid-19, along with theoretical reasons why they might exist, so it is quite satisfying to find that the Mainstream Media have at last woken up. Very substantial race differences in WuFlu incidence have now been found in Britain, to the extent that the British government is finally going to collect the data [Coronavirus cases to be tracked by ethnicity, by Rianna Croxford,  BBC, April 18, 2020] . And a professional anti-racism bureaucrat, Trevor Phillips [Tweet him] has co-authored a report documenting these racial disparities and calling for more research. He may even have found the answer to the puzzling question of why British Muslims seem less impacted than British Hindus.

Phillips, a former chairman of Britain’s Commission for Racial Equality concludes that some factors predict that certain ethnic groups would be at elevated risk from Covid-19 but then other factors militate against these. British Muslims (who are mostly South Asian a.k.a. from the Indian subcontinent) are surprisingly low in Covid-19 infections, despite the fact that British South Asians overall (many of whom are Hindu) are high in them. Possible explanation: the entrenched Muslim practice of ritual hand washing.

Phillips’s findings draw on the fact that, as of April, 14.4% of people in Britain who are critically ill with Covid-19 are South Asian, yet South Asians compose only 7.5% of the British population. Overall, 34% of those in intensive care for Wu-Flu in the UK are from ethnic minorities, despite their constituting only 14% of the population [Are ethnic minorities being hit hardest by coronavirus? by Benjamin Butcher & Joel Massey, BBC News, April 17, 2020].

Phillips, who is black and born in London to immigrant parents from what was then called British Guiana, has gone on something of a political odyssey over the last 10 years. He was recently suspended from the Labour Party for drawing attention to Muslim-Asian grooming gangs raping white girls [Trevor Phillips suspended from Labour over Islamophobia allegations, BBC News, March 9, 2020]. But, 13 years ago, he was leading campaigns to silence Nick Griffin, the leader of the British National Party, which had repeatedly protested the grooming gangs only to be met with universal—and, especially in retrospect, disgraceful—execration ['Awful, abhorrent'—but Oxford insists the debate must go on, by Rachel Williams & Matthew Taylor, The Guardian, November 26, 2007].

Now, however, Phillips claims to want a reasonable discussion about race, even a producing a documentary 5 years ago on the accuracy of racial stereotypes [Trevor Phillips says the unsayable about race and multiculturalism, by Michael White, The Guardian, March 16, 2015]. To this end, Phillips has presented us with his report Some observations on COVID-19 and Minorities in the UK, jointly written with his colleague Richard Webber [Email him] of Newcastle University, and published on WebberPhillips.com, April 20th. It is extremely interesting reading.

Secondly, Phillips and Webber look at the possible explanations for this ethnic disparity. Could it be race differences in low income and high poverty? No, conclude the authors, because

the most heavily affected boroughs are Brent, Southwark, Lambeth and Harrow, none of which figures in the top twenty most deprived indices drawn up by the government.

Could it be due to non-whites living in more overcrowded areas? Seemingly not. “Only 2 [of a list of the 9 most crowded London boroughs] figure as COVID-19 hotspots—Lambeth and Southwark” explain Phillips and Webber:

Outside London, the local authorities with a significant minority presence which do figure as COVID-19 hot spots are not particularly overcrowded.

What about ethnic differences in underlying health vulnerabilities? Possibly. But it cannot be the full explanation, Phillips and Webber because—

…the very sharp difference in prevalence between local authorities where the dominant minority is Indian compared to those where it is Pakistani or Bangladeshi suggests that the causes of minority vulnerability are far more likely to be environmental or behavioural.

The authors then note that there are likely to be different reasons why different ethnic minorities are more susceptible to Covid-19 than whites. But what is

…most striking is the absence from this list [of highly Covid-19-infected areas] of virtually all the English local authorities where the dominant minority group is Pakistani or Bangladeshi Muslim: Tower Hamlets, Luton, Slough, Redbridge, Waltham Forest and Blackburn. 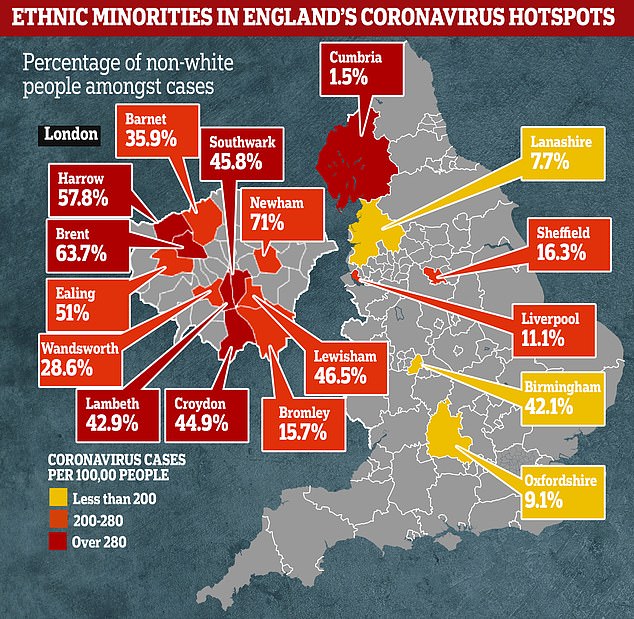 Trevor Phillips asks whether lack of Muslims in England's coronavirus hotspots may be down to their rigorous hand-washing practice five times a day, by Sam Blanchard, Daily Mail, April 20, 2020.

So, why would there be such a difference between Hindu areas of Britain and Muslim areas? Phillips doesn’t look at it in the report, but in an op-ed in The Times of London [We need to solve ethnic puzzle of Covid-19, by Trevor Phillips, The Times, April 20, 2020], Phillips suggests that the key could be the Islamic practice of ritual hand washing before prayer, which devout Muslims engage in 5 times a day. He writes that:

Maybe there is a revelation to be had here; if one key to stopping transmission of the virus is hand washing, might a faith community many of whose members ritually wash before five-times-a-day prayers have something to teach the rest of us?

What Phillips didn’t note is that he may have solved the puzzle of high South Asian Covid-19 but low Islamic South Asian Covid-19 in the UK. For genetic reasons, all South Asians are more likely to be obese and have diabetes than Europeans [Ancient origins of low lean mass among South Asians and implications for modern type 2 diabetes susceptibility, by E. Pomeray et al., Scientific Reports, 2019]. Diabetes, obesity and related problems such as heart disease make one much more vulnerable to serious complications from Covid-19. So, all being equal, British South Asians should be more vulnerable to Covid-19. And all is relatively equal, with Hindus in the UK enjoying similar socioeconomic status to whites according to a report [Poverty rates among ethnic groups in Great Britain, by Guy Palmer & Peter Kenway, Joseph Rowntree Foundation, April 30, 2007].

But, with the UK’s South Asian Muslims, there are cultural differences masking this effect. As Phillips points out, not only do they engage in frequent ritual ablutions but about 40% of them are unemployed, which will tend to mean less travel and less contact with other people. 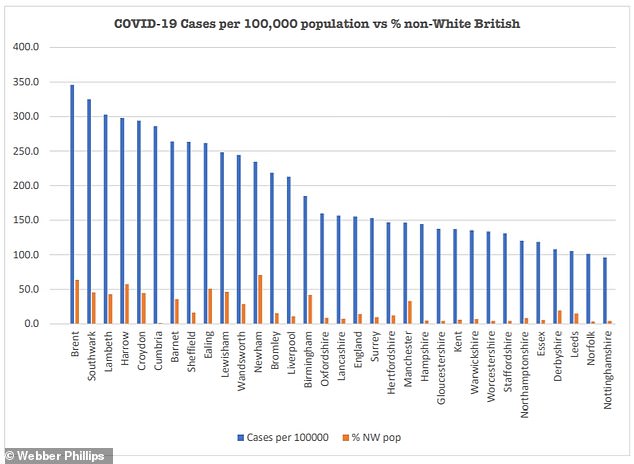 As we get more fine-grained information on ethnic differences in Covid-19, we will, hopefully, be able to increasingly untangle these different contradictory factors, leading us to the genetic and cultural reasons for race differences in the pandemic’s prevalence.