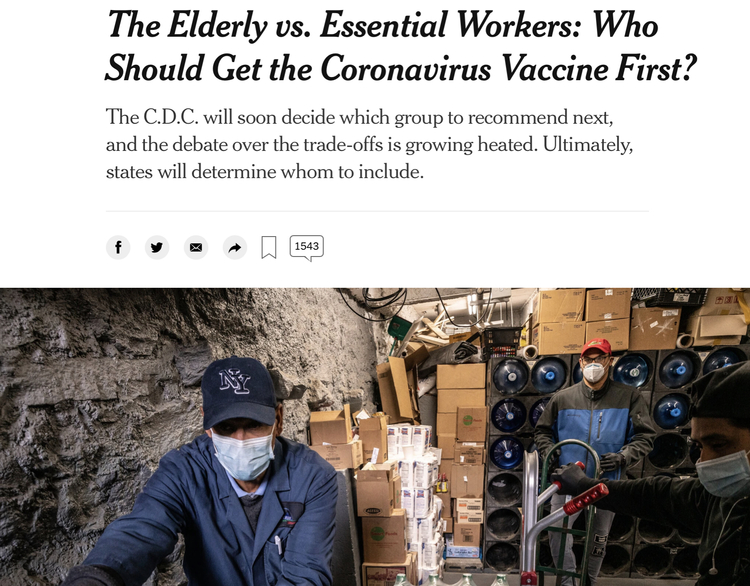 From the New York Times news section, an article in which it gradually becomes apparent that the only value conceivable in 2020 is: Would this policy benefit blacks more than whites? If so, good.

The Elderly vs. Essential Workers: Who Should Get the Coronavirus Vaccine First?

The C.D.C. will soon decide which group to recommend next, and the debate over the trade-offs is growing heated. Ultimately, states will determine whom to include.

With the coronavirus pandemic surging and initial vaccine supplies limited, the United States faces a hard choice: Should the country’s immunization program focus in the early months on the elderly and people with serious medical conditions, who are dying of the virus at the highest rates, or on essential workers, an expansive category encompassing Americans who have borne the greatest risk of infection?

Health care workers and the frailest of the elderly — residents of long-term-care facilities — will almost certainly get the first shots, under guidelines the Centers for Disease Control and Prevention issued on Thursday. But with vaccination expected to start this month, the debate among federal and state health officials about who goes next, and lobbying from outside groups to be included, is growing more urgent.

It’s a question increasingly guided by concerns over the inequities laid bare by the pandemic, from disproportionately high rates of infection and death among poor people and people of color to disparate access to testing, child care and technology for online schooling. …

Ultimately, the choice comes down to whether preventing death or curbing the spread of the virus and returning to some semblance of normalcy is the highest priority. “If your goal is to maximize the preservation of human life, then you would bias the vaccine toward older Americans,” Dr. Scott Gottlieb, the former Food and Drug Administration commissioner, said recently. “If your goal is to reduce the rate of infection, then you would prioritize essential workers. So it depends what impact you’re trying to achieve.”

One problem is that while we know the Pfizer and Moderna mRNA vaccines reduce cases of infection by 95% and severe cases by about the same or more, we don’t yet know how much the vaccines reduce infectiousness.

The trade-off between the two is muddied by the fact that the definition of “essential workers” used by the C.D.C. comprises nearly 70 percent of the American work force, sweeping in not just grocery store clerks and emergency responders, but tugboat operators, exterminators and nuclear energy workers. Some labor economists and public health officials consider the category overbroad and say it should be narrowed to only those who interact in person with the public.

… In a meeting last month, all voting members of the committee indicated support for putting essential workers ahead of people 65 and older and those with high-risk health conditions.

Historically, the committee relied on scientific evidence to inform its decisions. But now the members are weighing social justice concerns as well, noted Lisa A. Prosser, a professor of health policy and decision sciences at the University of Michigan.

“To me the issue of ethics is very significant, very important for this country,” Dr. Peter Szilagyi, a committee member and a pediatrics professor at the University of California, Los Angeles, said at the time, “and clearly favors the essential worker group because of the high proportion of minority, low-income and low-education workers among essential workers.”

That position runs counter to frameworks proposed by the World Health Organization, the National Academies of Sciences, Engineering, and Medicine, and many countries, which say that reducing deaths should be the unequivocal priority and that older and sicker people should thus go before the workers, a view shared by many in public health and medicine.

… But ultimately, the decision will be up to governors and state and local health officials. They are not required to follow C.D.C. guidelines, though historically they have done so.

…There are about 90 million essential workers nationwide, as defined by a division of the Department of Homeland Security that compiled a roster of jobs that help maintain critical infrastructure during a pandemic. That list is long, and because there won’t be enough doses to reach everyone at first, states are preparing to make tough decisions: Louisiana’s preliminary plan, for example, puts prison guards and food processing workers ahead of teachers and grocery employees. Nevada’s prioritizes education and public transit workers over those in retail and food processing.

The place with the fewest essential workers is Washington D.C.

At this early point, many state plans put at least some people who are older and live independently, or people who have medical conditions, ahead of most essential workers, though that could change after the C.D.C. committee makes a formal recommendation on the next phase.

One occupation whose priority is being hotly debated is teaching. The C.D.C. includes educators as essential workers. But not everyone agrees with that designation.

Marc Lipsitch, an infectious-disease epidemiologist at Harvard’s T.H. Chan School of Public Health, argued that teachers should not be included as essential workers, if a central goal of the committee is to reduce health inequities.

“Teachers have middle-class salaries, are very often white, and they have college degrees,” he said. “Of course they should be treated better, but they are not among the most mistreated of workers.”

Elise Gould, a senior economist at the Economic Policy Institute, disagreed. Teachers not only ensure that children don’t fall further behind in their education, she said, but are also critical to the work force at large.

“When you talk about disproportionate impact and you’re concerned about people getting back into the labor force, many are mothers, and they will have a harder time if their children don’t have a reliable place to go,” she said. “And if you think generally about people who have jobs where they can’t telework, they are disproportionately Black and brown. They’ll have more of a challenge when child care is an issue.” …

Moreover, vaccine trial results so far show only that the shots can protect the individuals who receive them. The trials have not yet demonstrated that a vaccinated person would not infect others. Though scientists believe that is likely to be the case, it has yet to be proved.

Does anybody have a plan for figuring this out?

… Harald Schmidt, an expert in ethics and health policy at the University of Pennsylvania, said that it is reasonable to put essential workers ahead of older adults, given their risks, and that they are disproportionately minorities. “Older populations are whiter, ” Dr. Schmidt said. “Society is structured in a way that enables them to live longer. Instead of giving additional health benefits to those who already had more of them, we can start to level the playing field a bit.”

But to protect older people more at risk, he called on the C.D.C. committee to also integrate the agency’s own “social vulnerability index.”

The index includes 15 measures derived from the census, such as overcrowded housing, lack of vehicle access and poverty, to determine how urgently a community needs health support, with the goal of reducing inequities.

In a new analysis of the states’ preliminary vaccine plans, Dr. Schmidt found that at least 18 states intended to apply the index. Tennessee, for one, has indicated that it will reserve some of its early allotments for disadvantaged communities.

Still, some people believe it is wrong to give racial and socioeconomic equity more weight than who is most likely to die. …