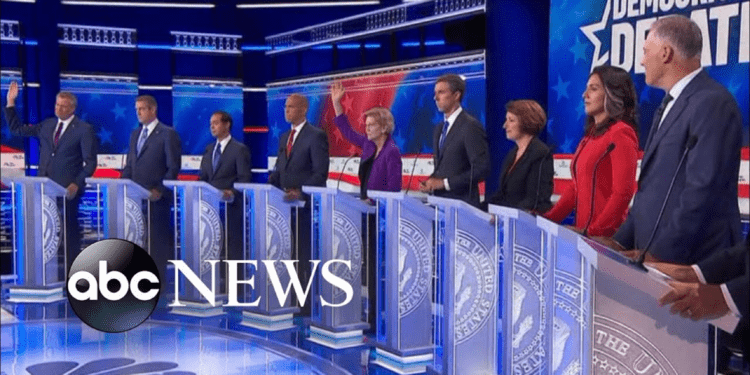 This is from the NBC Transcript of the recent Democratic debate. Of course, with so many candidates, it's more like a quiz show, and what the MSM is inquisitive about is imaginary white terrorists.

This is true, in the sense that the FBO Director said that [FBI's Wray says most domestic terrorism arrests this year involve white supremacy, by Morgan Chalfant, The Hill, July 23, 2019.] but it just reflects the FBI’s obsessions, not the relative threat level.

Congresswoman Gabbard, to you. As president, would you direct the federal government to do something about this problem that it is not currently doing?

[Tulsi] GABBARD: Yes, I would. We have seen for far too long the kind of racial bigotry, divisiveness, and attacks that unfortunately have taken the lives of our fellow Americans. Leadership starts at the top. It's important that we set the record straight and correct the racial injustices that exist in a very institutional way in our country, beginning with things that have to do with our criminal justice system, where predominantly the failed war on drugs that has been continuing to be waged in this country has disproportionately impacted people of color and people in poverty.

This is something that I'll do as president and commander-in-chief, is to overhaul our criminal justice system, working in a bipartisan way to do things like end the failed war on drugs, end the money bail system, enact the kinds of prison reforms and sentencing reforms that we need to see that will correct the failures of the past.

The most important thing here is that we recognize that we have to treat each other with respect, all of us as fellow Americans, regardless of race, religion, ethnicity, gender, orientation, and our politics. That kind of leadership starts at the top. As president, I will usher in a 21st century White House that actually represents the interests of all Americans, first and foremost.

WELKER: Congresswoman Gabbard, thank you for that.

I frankly don't think that was a responsive answer. In response to a question about imaginary white terrorists, Tulsi is planning to let real black criminals out of jail.

Mr. Yang, what would you do about the issue of white supremacist violence?

[Andrew] YANG: Well, first, we have to designate white supremacist terrorism as domestic terrorism so that the Department of Justice can properly measure it.

My counter-proposal is to designate Black Lives Matter-inspired terrorism as domestic terrorism, partly because it's a genuine mass movement with rioters everywhere, and partly because of all the murders. I've used the phrase "Black Lives Matter gunman" to describe the kind of people who killed five cops in Dallas, and two in Brooklyn, and three in Baton Rouge...and how many more? But I can tell you what happened when the FBI started to study "Black Identity Extremism"—the New York Times had a fit. [The F.B.I.’s Black Phantom Menace by Andrew Rosenthal, October 19, 2017]

Anyhow, Yang is, believe it or not, talking about the "root causes" of white radicalism.

I talked to an anti-hate activist named Christian Picciolini who told me about how he was radicalized over a 10-year period. He said he was a lonely 14-year-old and that he was reached out to by a hate group and he wound up joining it for a decade. Now he's out and he's helping convert people out of those hate groups and back into the rest of society.

So what we have to do is we have to get into the roots of our communities and create paths forward for men in particular who right now are falling through the cracks. And when you look at gun violence in this country, 96 percent-plus of the shooters we're talking about are young boys and young men. We have to as a country start finding ways to turn our boys into healthy, strong young men who do not hate, but instead feel like they have paths forward in today's economy.

WELKER: Mr. Yang, thank you for that. [Emphases added.]

Maybe this "root causes" thing would work better on whites than on blacks, but it ignores the fact that whites commit very little violence compared to blacks, and of course Democrats won't be able, let alone willing, to target any help to disenfranchised white communities.