There's been another  Black Lives Matter-inspired shooting in Louisiana, six officers shot by a black ex-Marine with a rifle.  His motivation was some kind of anti-white craziness in addition to all the encouragement and incitement that blacks have been getting from the media and President Obama:

Story coming on Gavin Long. Was former Nation of Islam member, railed against "crackers." Had this cryptic message: pic.twitter.com/dwjBgplOxA

Most of the headlines in the stories about Long don't identify him as a black male, and you have to read down in the story to find out that fact.

My phone beeped when four different conservatives (more or less) that I follow retweeted this picture of the one (as far as I know) black victim.

This is Officer Montrell Jackson & his baby boy. He was killed in #BatonRouge today. pic.twitter.com/xNdhF0JE2Y

I sympathize with the officer's death, but I think that the people who are retweeting his picture are doing so for the same reason the NYT posted this image with it's "one of the first people crushed by the truck was a Muslim". 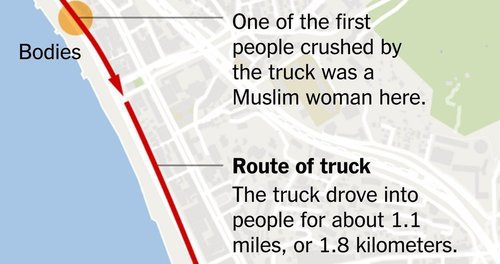 The attack in Nice was aimed at white French Christians  and killed more than 80. The shooter in Baton Rouge was aiming at whites and scored 5 out of 6.

People who emphasize this other stuff are engaging in wilful blindness to the realities of anti-white hate.