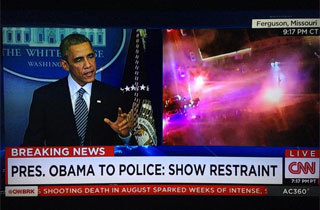 Three days before Ismaaiyl Brinsley murdered two NYPD cops as his contribution to the campaign of the Obama Administration, the prestige press, and goodthinkers everywhere against white haters murdering black babies like Trayvon Martin, Michael Brown, and Eric Garner, I wrote in Taki’s Magazine:

This fringe coalition is fragile in another sense as well: if the underlying engine of your politics is hate (as suggested by all these hate hoaxes that are the KKKrazy Glue of the Obama coalition), you are going to attract and excite a lot of psychologically fragile fringe personalities. And they tend to repel the normal and healthy.

The “social justice” brand appeals to the unhappy and unsettled. More than a few aren’t quite right in the head: the criminal, the paranoid, the fantasists, and those obsessed with obscure ancestral vendettas. By working so hard to lure in individuals motivated by their anger at cisgendered straight white males, the progressives wind up encouraging and highlighting borderline personalities, such as Michael Brown (a mentally stable 6’4”, 290-pound black teenager would have been spending August at football practice, not knocking over convenience stores) and the cast of crazies in the U. of Virginia gang rape hoax.

The spirit of the age appeals most to the most troubled spirits.

The President of the United States should not use the power and prestige of his office to exacerbate unhinged fantasies about murder and rape. Obama and his underlings have been playing with extremely dangerous themes for their own political benefit. They ought to stop.