From Lancet, the famous British medical journal, a book review:

On the morning of Sept 15, 1963, a Sunday, Addie Mae Collins, Cynthia Wesley, Carole Robertson, and Carol Denise McNair were killed by whiteness. …

For some reason, this lengthy book review fails to mention Emmett Till was also killed by whiteness.

Comprehending the deaths of these Black children—killed by white men and boys in the American South in 1963—requires confronting the white racial terror that threatened Black communities and unearthing the legacy of death that courses alongside even the youngest Black lives.

Capitalizing “Black” but not capitalizing “white” is a dead giveaway of racist animus in a writer. It’s like the OK sign is, in the minds of ADL Hate Trackers, except it is 99% accurate.

Yet, as the present historical moment observes a rise in white deaths, the connections between white racial terror and premature death appear lost in public and academic discourse.

In Dying of Whiteness, Jonathan Metzl attempts to trace these connections by probing how the armed defence of whiteness harms and sometimes kills white people too. Situating his analysis within the political landscapes of Missouri, Tennessee, and Kansas, Metzl explores how white Americans arm themselves with guns or votes, and attempt to individually secure the benefits of whiteness, shaping in the process the population health outcomes of everyone living in the wake of their political decisions—including other white people. From expansive gun legislation to broad divestment in government programmes, Metzl characterises white liberties that endanger white lives or imperil white futures as “dying of whiteness”.

… Framed against the backdrop of the 2016 US election, Metzl tries to fill this void by naming a common aetiology threatening the health of white Americans. Something he calls, “racial resentment”. As he argues, “resentment against changing demographics” and groups like “immigrants or minorities”, “shapes [white] attitudes towards various acts of legislation”, particularly during times of economic insecurity. In other words, to “maintain an imagined place atop a racial hierarchy”, white Americans who harbour “racial resentment” adopt political orientations and voting patterns largely based on if, and how, those choices seem to limit the freedoms or resources available to non-white and/or Black people. Yet they also do so, even when those decisions threaten their own wellbeing or that of other white people. This, in Metzl’s estimation, is how whiteness harms population health.

But foregrounding “resentment” as the source of self-destructive white political behaviours has consequences. First, it erases white agency through emotional euphemism. Second, it minimises how white racism, especially when enacted through political choices, can simultaneously be self-interested and self-destructive. At times, Metzl artfully articulates and historicises the racist origins of white interest in firearm fanaticism and “small government” politics. At others, he turns to “racial anxieties”, racially charged “fears”, or “racial resentment” to describe white people’s political investment in white racial dominance. The effect is white choices to advance structural racism, and the violence those choices engender at a population level, get misinterpreted as primarily emotionally driven or disconnected from material reward.

This tendency, to mis-attribute white self-destruction and violence to psychological states or to obscure the impacts of defending whiteness through emotional euphemisms, is a common practice. For example, the disaggregated drivers of all-cause white mortality (conditions such as suicide, chronic liver disease, and drug and alcohol poisoning) have been described as “diseases of despair” rather than diseases of disproportionate opportunity (to wield firearms) and access (to prescription opiates). Media responses to white perpetrators of mass shootings have cited abstract “mental illness”, labelled shooters as “lone wolves”, and treated their violence as idiosyncratic rather than the deadly confluence of white racial terrorism, patriarchy, and liberalised access to guns. Even research examining the relation between whiteness and health suggests psychological “distress” contributes to how whiteness impairs health. And increasingly, intellectuals rapt with the concept of “white fragility” focus on the emotional discomfort white people experience when confronted with their racism, rather than the legacy of death in whiteness’s wake. To assert that resentment, despair, or any emotion that arises from being “left behind” accounts for white Americans’ self-destructive actions, violent politics, or declining population health misses two counterpoints.

First, if any population has been left behind in America’s colonial-turned-industrial-turned-technocratic political economy, it is Black (and Indigenous) people.

Academic Whiteness Studies is extremely intellectual, so unless you are as highbrow as Rhea Boyd MD, you probably won’t understand her complex worldview, which is:

Excuse me, my apologies, what I meant to say is:

Blackness is Goodness, but whiteness is badness.

As all of us Woke Folk now know, Blacks deserve capitalization but whites do not.

Yet scholars, the media, and the public seem intent on viewing white voter patterns post-2016 and rising white deaths post-2010 as born of recessions, resentment, and racial divides. This myopathy overlooks the evolving ways white Americans continue to mobilise to maintain or extend the exclusive advantages whiteness offers those who can become white, even as those advantages place them in increasing proximity to death.

When confronted with self-inflicted or white on white violence, scholars, the media, and the public are evading the logical conclusion—one Metzl both illuminates and eschews—despair isn’t killing white America, the armed defence of whiteness is.

To be clear, it is not that amid the armed defence of whiteness some people have inadvertently or indirectly died. Rather, death is the inevitable consequence of the full realisation of structural racism and the exclusive rights and resources it offers those who can become white. This type of death is perhaps more easily recognised when it is sudden and violent—like the deaths of Addie Mae, Cynthia, Carole, Carol Denise, Johnny, and Virgil. But it can also be “slow and [nearly] invisible”, as it is among white Americans who will deteriorate from chronic liver disease or substance use.

Ultimately, white racial terror can strike by blunt force or decaying infrastructure, through frank abuse or frank neglect. It can kill babies or mothers, immigrants or Indigenous peoples. But within a white racial ordering of humans, rights and resources, non-white and/or Black deaths become naturalised and expected. And white deaths appear to be the aberration. But they evidence the rule, not the exception.

For humans to use whiteness to manufacture access and privilege, they must engineer scarcity and loss.

Scarcity is a social construct. Without People of Whiteness engineering scarcity, there’s be plenty of cargo for everybody.

This entanglement between access and scarcity, privilege and loss, means white people’s unearned advantages have always been tethered to a legacy of untold deaths. This is not the result of an emotional positioning, but a structural one. In Dying of Whiteness, Metzl intricately outlines this structural framework but too often anchors it to an emotional foundation his analysis both critiques and depends on. This is perhaps why his conclusion is to “Promote more healthy and self-reflective frameworks…of structural whiteness” when the only solution is to eliminate whiteness all together.

Because the consequences of structural whiteness are fatal and as new populations seek its exclusive advantages, the associated harms continue to unfold. For example, as some Asian American students challenge affirmative action, they not only risk eliminating opportunities for higher education they also risk decreasing life expectancy for affected non-white and/or Black students too. And as Hispanic Americans increasingly select white on the census, it reveals pressures to assimilate that may endanger their population health as well.

… The solution to defending whiteness is not self-reflection. It is not a difficult conversation. And it is not centring white emotions, however distressing they may be. The solution is those who can become white must summon the courage to unbecome white and then to eliminate whiteness, “the system, the way of life, the philosophy [producing] murderers”. 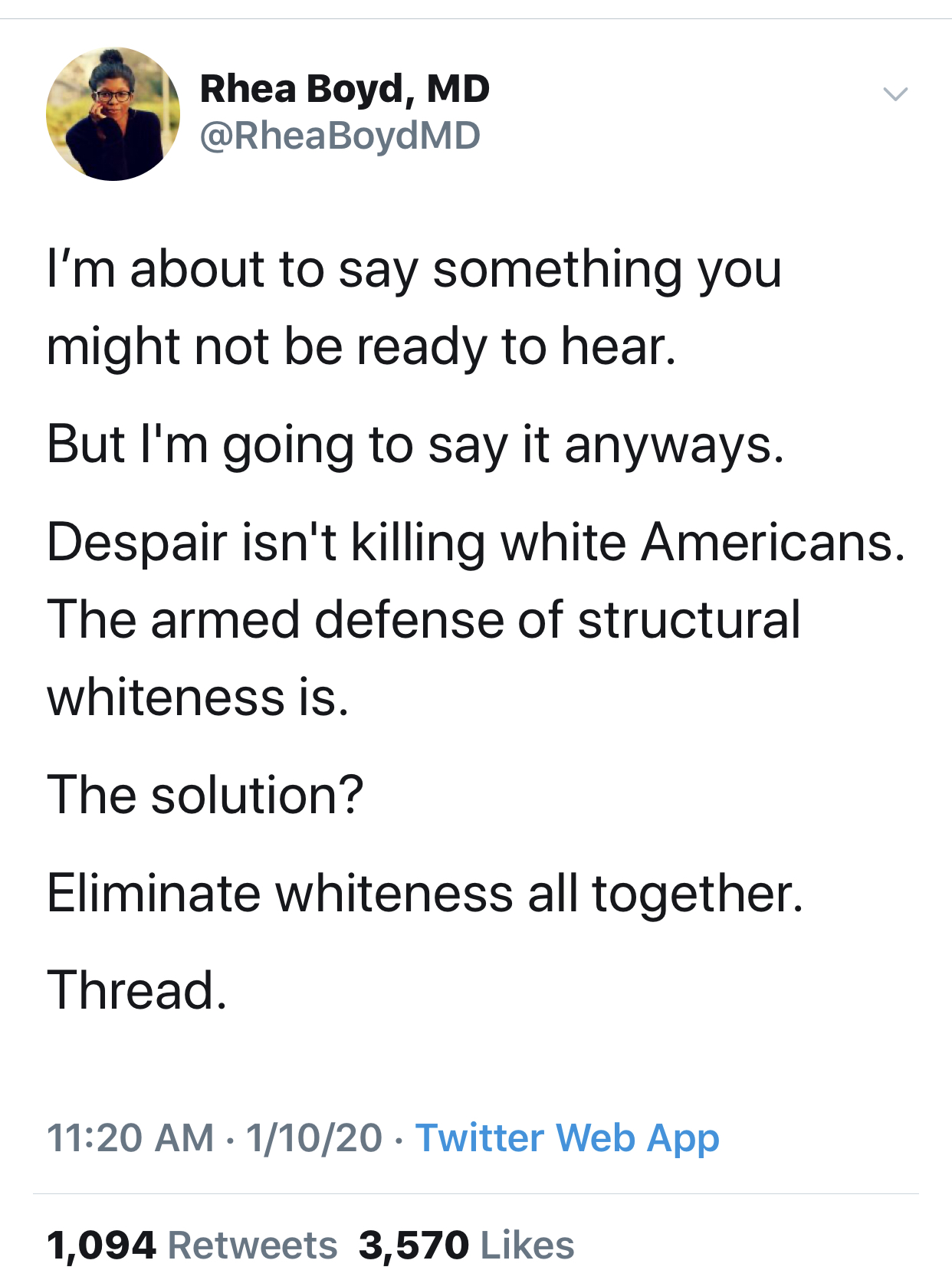 Similarly, I’m about to say something you might not be ready to hear.

But I’m going to say it anyways.

Your message to your critics is simple: