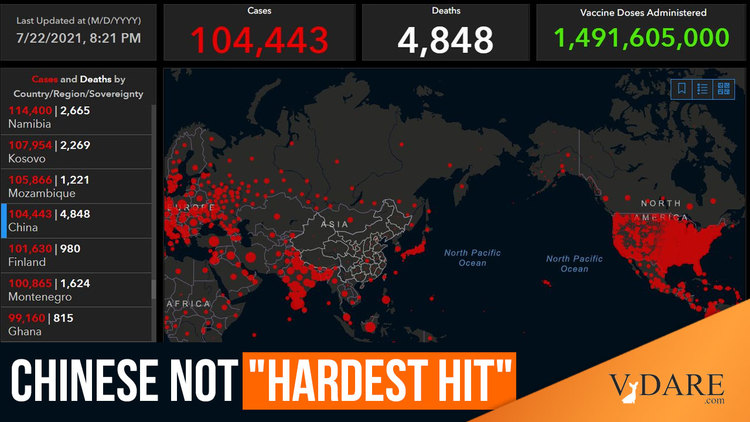 Did China Create Covid As A Bioweapon Targeting Non-Chinese?

Representative Marjorie Taylor Greene (R-Ga) seems to raise at least half the important issues supplied by our Congresscritters. This one is extremely important:

In a Wednesday appearance on Steve Bannon’s “War Room,” Greene said she and other members of Congress were recently briefed by virologist Dr. Li-Meng Yan about the bioweapons program at the Wuhan Institute of Virology…

…Dr. Yan… published a study in March characterizing COVID-19 as an “unrestricted bioweapon.”

Unfortunately this assertion fits the facts.

Ground Zero for monitoring this disease is the Covid-19 Dashboard maintained by Johns Hopkins University. Updated daily, this reports the cumulative number of cases and deaths reported apparently by every country in the world.

(Figuring out rankings on the Johns Hopkins site has become much more difficult than it was a few months ago. Maybe China complained.)

I see three possibilities for explaining this bizarre situation

Nicholas Wade’s Pulitzer Prize-worthy article The origin of COVID: Did people or nature open Pandora’s box at Wuhan? Bulletin of the Atomic Scientists May 5, 2021 is imperative reading.

China is not our friend. US-China policy needs radical re-thinking.