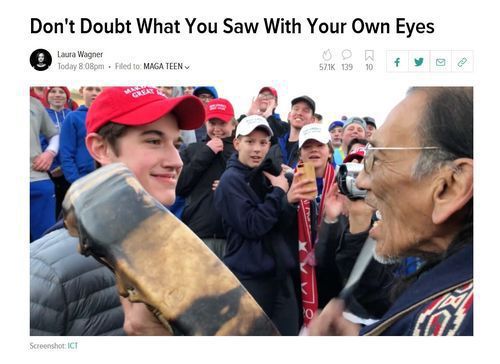 "Deadspin" Is Dead—Killed By Wokeness

Pleased to announce I have been hired as editor-in-chief of Deadspin, which will now exclusively report on cricket.

Pleased to announce that Ben Sixsmith has hired me as golf-course-architecture correspondent of Deadspin, which will now exclusively report on cricket and golf.

Deadspin used to specialize in servicing the needs of people who hate sports but want to read about sports, all 29 of them, such as this early 2019 article on why the Covington Catholic smirking bro really was evil:

Don’t Doubt What You Saw With Your Own Eyes

Two days ago, video was posted online that pretty much everyone who saw immediately recognized for what it was—footage of white teens taunting and harassing a Native American elder named Nathan Phillips on the steps of the Lincoln Memorial. What was happening was clear and unmistakable, not just resonant but immediately recognizable as iconic. If you wanted to compress the history of relations between the powerful and the powerless in America, or the dynamics of the current moment, into a single image, you couldn’t do much better than to present a white teen in a MAGA hat, surrounded by a screaming horde of his peers, smirking into the face of an old Native American man.

But then the new CEO of Deadspin told the writers that, like ESPN, whose CEO told its journalists a couple of years ago to stick to writing about sports rather than how much you hate white male sports fans, to stick to sports. So yesterday many of the Deadspin writers quit. Because they hate white men more than they love sports.

Back in March I decided: I’m 60 years old and the Dodgers are probably going to win 100 games this year, so I’m going to indulge myself by following baseball closely in 2019, but I’ll make up for it by not following football. The good news is that ESPN.com proved surprisingly competent at servicing my baseball fandom needs. The bad news is that they weren’t the iSteve content-generators that I had expected from ESPN’s Colin Kaepernick era.

Then in September, I looked at the lineups of the teams that the Dodgers might meet in the postseason and said, “Holy cow, the Washington Nationals are terrifying.” But I didn’t mention it at the time, so I can only assert I saw it coming.

Congratulations to the Nationals and their fans.