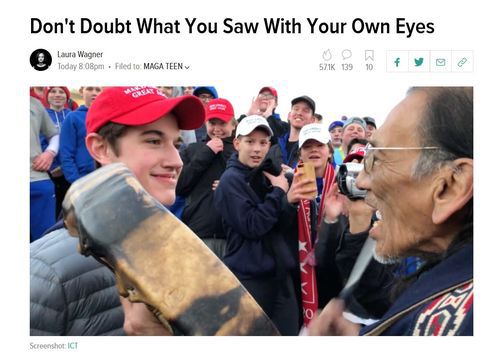 Deadspin Explains It All: "Don’t Doubt What You Saw With Your Own Eyes"

Don’t Doubt What You Saw With Your Own Eyes

Two days ago, video was posted online that pretty much everyone who saw immediately recognized for what it was—footage of white teens taunting and harassing a Native American elder named Nathan Phillips on the steps of the Lincoln Memorial. What was happening was clear and unmistakable, not just resonant but immediately recognizable as iconic. If you wanted to compress the history of relations between the powerful and the powerless in America, or the dynamics of the current moment, into a single image, you couldn’t do much better than to present a white teen in a MAGA hat, surrounded by a screaming horde of his peers, smirking into the face of an old Native American man.

Perhaps—probably—because what had happened was so undeniable, it was immediately denied. Right-wing trolls not only immediately proposed that the visibly aggressive teens, who were draped in the symbols of white nationalism and misogyny, were in fact the aggressed upon, but began a campaign of brutal online harassment against anyone—especially journalists and especially female journalists—who accurately described what they had seen, or reacted to it on the terms it deserved. In all it was an enactment of the culture-war tactics pioneered by Gamergate and used by Donald Trump to ascend to the pinnacle of global power: While random MAGA chuds and Pepes doxxed and threatened people online in an attempt to silence them and intimidate others, respectable types urged caution, proposing that if you were thoughtful enough you would perhaps realize that you hadn’t in fact seen what you had just seen, or that if you had, maybe it wasn’t that bad at all. Straight news reporters like the Wall Street Journal’s Byron Tau turned the subtext into text, asking whomst among us hasn’t participated in a racially-charged frenzy of barely-restrained violence that they wish hadn’t been become an instantly iconic representation of what America has been historically and what it is now: