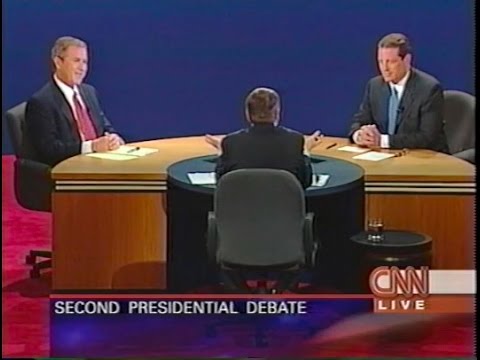 Video of George W. Bush Calling for Laxer Scrutiny of Arabs 11 Months Before 9/11

With Jeb Bush and Donald Trump arguing over whether George W. Bush failed to stop 9/11, it’s worth going to the videotape (47:28) of the second Presidential debate of 2000. On 10/11/2000, the Texas governor denounced heightened scrutiny of Arab airline passengers by airport security. Bush said on national TV:

Secondly, there is other forms of racial profiling that goes on in America. Arab-Americans are racially profiled in what is called secret evidence. People are stopped, and we have to do something about that. My friend, Senator Spencer Abraham of Michigan, is pushing a law to make sure that Arab-Americans are treated with respect. So racial profiling isn’t just an issue at local police forces. It’s an issue throughout our society. And as we become a diverse society, we’re going to have to deal with it more and more. I believe, though — I believe, as sure as I’m sitting here, that most Americans really care. They’re tolerant people. They’re good, tolerant people. It’s the very few that create most of the crises, and we just have to find them and deal with them.

Note that when the future President said “we just have to find them and deal with them,” the “them” he was referring to as having to be dealt with were not Arab skyjackers but airline and airport employees worried about stopping Arab skyjackers.

In accordance with this statement, Bush appointed Democrat Norman Mineta Secretary of Transportation and directed him to root out profiling of Arabs at the airport.

In 2005, airport counter clerk Michael Tuohey told Oprah Winfrey of his encounter early on 9/11/2001 with the leader of the terrorists:

By the way, on a personal note, this may have been when I started to realize I was the world’s least viral journalist. I’m not sure if the word “viral” had that meaning on 9/11/2001, but if it did, I was sure that the President’s 11-month-old denunciation of anti-terrorism efforts would soon go viral. I vividly recalled watching Bush say this to a huge television audience less than a year before. Back then you couldn’t post video, but it was easy to find a transcript. So I stayed up late that night writing up “Bush had called for laxer airport security” so I wouldn’t get scooped too badly by all the other pundits.

In all the rush, it didn’t get published for about a week. Yet by then, nobody else had brought it up. When my piece didn’t get any attention, well, lots of stuff was happening.

Every few years since then, I’ve brought up Bush’s statement, but it never seems to register on anybody other than my core readers. It’s an interesting example of the Sapir-Whorf effect in action. We are given categories to file facts away in: e.g., Republicans Are Racist; Bush Protected Us from Terrorism, etc. It’s very hard to remember anything that doesn’t fit in the right slots.

This is the first time I’ve posted video of Bush saying this. We’ll see if this makes any difference in the impact, although by now, after 14 years, I doubt it.

Similarly, the big Bush Push of 2002-2004 to ease traditional credit standards, such as down payments and documentation, that have disparate impact on black and Hispanic mortgage-seekers is practically impossible for most people to remember because it doesn’t fit in the categories: Republicans Are Racist; Bush Protected Us from Liberalism, etc.

Here’s a video of Bush telling his federal regulators that down payment requirements are keeping minorities from achieving the American Dream:

But I’ve posted this before with negligible impact.