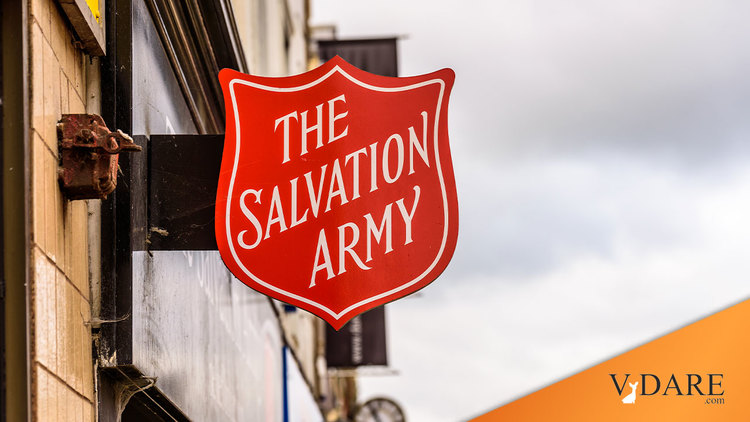 So keep your change in your pockets the next time you hear the bells of Salvation Army around Christmas. You see, those in charge of the Salvation Army are now encouraging Salvationists to “repent” their racism, as yet another organization has surrendered to the ideals of Critical Race Theory.

The news is replete with examples of corporations and institutions going woke, from Google to Aunt Jemima. Unfortunately, now The Salvation Army is in danger of joining the ranks of Woke Inc.

In materials prepared for its more than 1.5 million members, The Salvation Army uses terms that echo both radical “anti-racism” jargon and the divisive teachings of critical race theory, which divides people into two camps: the oppressors and the oppressed.

And many of this trusted charitable organization’s donors and other supporters aren’t even aware of the change.

Despite being apolitical historically, The Salvation Army has begun to promote political and racial ideologies under the banner of its New York-based International Social Justice Commission since the protests and riots over George Floyd’s death in police custody began over a year ago.

The International Social Justice Commission works on issues involving human rights and justice, from human traffickers to asylum-seekers. But more recently, the commission, launched in 2007, is unhealthily mixing admirable human rights work with politically charged advocacy based in progressive politics.

As many Americans know, The Salvation Army, founded in London in 1865, is a church organized in an “army” structure encompassing “officers,” “soldiers,” and other volunteers. Collectively called Salvationists, they serve the organization and are inspired to perform good deeds on account of their Christian faith.

Early this year, Brian Peddle, general and international leader of The Salvation Army, announced an initiative called “Let’s Talk About Racism,” a curriculum with devotionals, videos, and other materials dedicated to helping Salvationists conduct “courageous conversations about racism.”

Peddle, who is Canadian, says in the video announcement Feb. 9 that the resource would help Salvationists “overcome the damage racism has inflicted upon the world, and yes, The Salvation Army.”

The brief video, however, makes no attempt to back up or explain the bold accusation that racism has damaged The Salvation Army at any significant level.

The Salvation Army has a long, storied history of meeting spiritual and physical needs around the world. Many Americans may interact with the church only around Christmastime, when its volunteers ring bells in front of grocery stores to attract cash contributions in red kettles. The organization also runs hundreds of thrift stores and shelters in over 100 countries.

Salvationists throughout the world attend church services on Sundays as part of their local chapter, and some shepherd these congregations. The first goal listed on the website of The Salvation Army International is “advancement of the Christian religion.”

Having met many Salvationists personally, I can attest to the depth of their faith and commitment to evangelism. In many ways, The Salvation Army is a prime example of what it looks like for the Christian church to be devout in both faith and deed.

But today, the Christian witness of this esteemed institution is under threat from within.

The “Let’s Talk About Racism” initiative, officially rolled out July 7, is described in five slides that outline the larger Christian church’s alleged complicity in racism and provide action plans to combat racism through what the initiative calls an “anti-racist” lens. (The resource page provides translations in Spanish and Portuguese.)

One Salvation Army captain told me that the leadership of the organization disseminated this curriculum via emails, videos, and other presentations through its four territorial commanders and to field officers who serve poor communities across the United States.

In some aspects, the materials are indistinguishable from the “anti-racist” programs of any multinational corporation, or the expounding of critical race theory at a major university.

“Let’s Talk About Racism” accuses white Salvationists of being unable or unwilling to acknowledge their racism, just as Robin DiAngelo argues in her book “White Fragility” that whites are defensive about racism or race-related issues in general.

The Salvation Army initiative attacks “colorblindness” on race with the same argument used by Ibram X. Kendi, author of the book “How to Be an Antiracist,” which is to characterize it as a false neutrality that reveals a person’s inner racism.

The initiative also includes definitions of institutional racism, systemic racism, and “Whiteness” that identify real or perceived differences in life outcomes (“inequities”) as attributable not to individual effort and other circumstances, but to discrimination.

As such, the materials starkly resemble the radical “anti-racist” programs such as Coca-Cola’s “Be Less White” program, or The Smithsonian Institution’s own “anti-racism” materials.

The Salvation Army’s materials include sections on police brutality, health care, and black unemployment that assign blame to “racism” and “racial inequity.” This race-based lens informs the curriculum’s explanation of related statistics, stating that disparities are evidence of deep-rooted structural racism while betraying Salvationists’ historical commitment to staying out of partisan politics.

The “Let’s Talk About Racism” document flirts with accusing The Salvation Army itself of being complicit in systemic racism. For example, while mentioning the organization’s “progressive” view on the subject, it asserts there is “little doubt as to whether racism has impacted The Salvation Army in policy and practice.”

One study question asks: “How would The Salvation Army at the corporate level be strengthened by taking an active stance for racial equity and unity?”

This question implies that the church so far has been passively complicit. And notice that it uses the word “equity” instead of “equality.”

The biggest attack on Salvationists, however, is an admonition that they “repent” and offer “a sincere apology” for racism. In Section Four—called “Describe and Plan: How Then Shall We Live?”—the authors tell members that “the need to receive a sincere apology is necessary.”

“Please take time to write out or think about how you can repent and apologize,” they write.

Critical Race Theory is nothing more than an anti-white initiative to forever force white people to acquiesce their future, by admitting their ancestors were nothing more than oppressors of people of color. And now the Salvation Army has implemented this ideology and encouraged Salvationists to acknowledge their systemic racism and repent for their racism.