Criteria #1 To Win Sheldon Adelson Primary: Not Being A True American 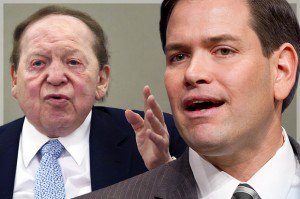 Not really "Born in the USA" H/T Salon.com

Personal matters prevented me from blogging during much of April. One of them was massive and debilitating nausea caused by contemplating the appalling Sheldon Adelson Primary last weekend - which Pat Buchanan was far too kind to describe as involving Biblical Values–Or Sheldon Adelson’s Vegas Values?

Analytically nothing has changed from last year’s abomination which I described in "Sheldon City”—Supreme Court’s McCUTCHEON Allows Adelson To Buy Amnesty/ Immigration Surge Even Faster and the fruits of which were evident alas right after the election: Why Has GOP Leadership Spurned Base, Election And Constitution? Severe ADD (Adelson Dollar Disorder)!

But consciousness of this terrible scandal is rising, at least amongst the dissident political webzines. I again salute  billmoyers.com for raising a key point Why Do Political Reporters Refuse to Show Us the Money? By Eric Alterman May 1, 2015

Reading through the disgusting entails (even belatedly) unfortunately is going to be essential for discerning the future of what was once the American Republic. A good starting point is Marco Rubio takes lead in Sheldon Adelson primary by Alex Isenstadt Politico.com 4/23/15

What this demonstrates is that disdain and hostility to the Historic American Nation is an acid test for Adelson’s support.

Rubio has reached out to Adelson …and has provided him with the most detailed plan for how he’d manage America’s foreign policy…. In recent months, he‘s been calling Adelson about once every two weeks

but more is what is required

Adelson, whose father emigrated from Lithuania and worked as a cab driver, has come to admire Rubio, the son of a bartender and a hotel maid, for his compelling life story. On March 2, the two had a private dinner at Charlie Palmer, a posh steakhouse at the foot of Capitol Hill. There, they talked for hours about their families and personal lives.

Please note that nothing apparently was said about how wonderful America was for generously providing these individuals the chance to prosper and be free in the New World. The days when immigrants routinely said this have gone. Adelson has no record of grateful comments about America. Instead we can be confident that what was expressed was Bloomberg style disdain for the host population – blatantly asserted by Rubio’s staff in 2013 - and immigrant mythology.  Adelson has a record here too.

Other than crazy Zionism, the first sign of Adelson’s predilections was in the weird Newt Gingrich Hispandering effort in 2010 – financed by Adelson. This recurred in the 2012 campaign.

What Patriots and Republicans (if there is a distinction) have now to face is that the GOP appears now to be owned by a man to whom not really being an American is a (possibly the) qualification to be President.

The bitterly-missed Larry Auster was justified in saying