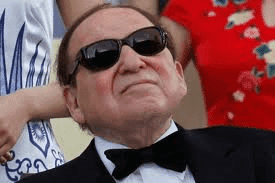 S.Adelson: I own you all. Get used to it.

The disgusting and humiliating spectacle last week of Congress groveling before Israel Prime Minster Netanyahu (with a Stalinesque 25 standing ovations according to one count) has stimulated a trickle of courage about what appears to the motivating factor in this contemptible display.

ZeroHedge has posted Sheldon Adelson – The Dangerous American Oligarch Behind Benjamin Netanyahu by Taylor Durden 03/09/2015 This is a repost of an essay with the same title by Michael Kreiger LibertyBlitzKreig Monday Mar 9, 2015

Of all the commentary written about Netanyahu’s embarrassing political stunt in front of the U.S. Congress last week, the most important angle was largely overlooked. That is, it sort of represented a coming out party for the American oligarch from behind the curtain.

Sheldon Adelson, by all accounts a vile and violent sort of the worst kind, has made entirely controlling the Republican party his lifelong achievement. Additionally, and quite significantly to U.S. and Israeli citizens, Mr. Adelson has transformed himself into the puppet-master behind Benjamin Netanyahu. Just so there’s no misunderstanding about who Sheldon Adelson is, let’s revisit a post from last year titled, Inside the Mind of an Oligarch – Sheldon Adelson Proclaims “I Don’t Like Journalism”. Here’s an excerpt:

… Adelson also said Israel would not be able to survive as a democracy: “So Israel won’t be a democratic state, so what?”

…“I don’t like journalism,” Adelson said, highlighting what he said was the media’s insistence on focusing on the empty half of the glass.

Kreiger (who begins his essay by quoting from Adelson: Obama should fire nuke to send message to Iran by Aaron Blake The Washington Post October 23, 2013) then links to a remarkable essay by none other than Bill Moyers, former LBJ Press Secretary and a Liberal MSM Big Foot for almost 50 years.

Everything you need to know about Israeli Prime Minister Benjamin Netanyahu’s address to Congress Tuesday was the presence in the visitor’s gallery of one man – Sheldon Adelson.

This summarizes what is known of Adelson’s massive political spending in both America and Israel and proceeds to say the Unsayable:

Netanyahu gets …to usurp American foreign policy as he manipulates an obliging US Congress enamored of Adelson’s millions, pushing it further to the right on Israel and the Middle East… Not only is this casino mogul the unofficial head of the Republican Party in America (“he with the gold rules”), he is the uncrowned King of Israel

.. the US cannot determine its own policy in the Middle East and the majority in Congress are under the thumb of a foreign power.

Like a King Midas colossus, Sheldon Adelson bestrides the cause of war and peace in the most volatile region of the world… We are hostage to his fortune.

Students of the American MSM will not be surprised that this genuine Elder Statesman is reduced to publishing his important assessment on his own blog, rather than the The Washington Post or the New York Times. Did anyone see any T.V. Network follow up interviews?

Left unnoticed in all this is an even more important matter: Adelson’s culpability in the GOP’s capitulation on Obamnesty, which was snuck through under cover of the Netanyahu commotion that afternoon. America can survive some stupid and costly foreign wars: the Obama No Borders policy will destroy her.

ZeroHedge does wonderful work but usually averts its eyes from the immigration dimension as I noted recently in Inadvertently, ZEROHEDGE Illustrates The Catastrophic Impact Of Excessive Immigration On Ordinary Americans. But this was a brave post. Moyers has been spectacularly involved in the worst social policy developments of his time including the 1965 Immigration Act: but this was a courageous statement. And one should not forget Black Columnist Bravely Denounces Sheldon Adelson’s Corruption Of Politics.

Perhaps the hubristic Netanyahu excess is sparking realization: Sheldon Adelson is not just Bad For America – but other groups too.