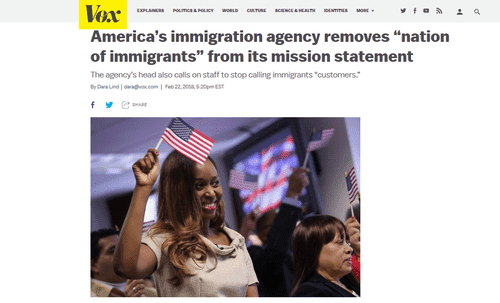 Re: Federale’s article Trump Foes, Friends Fighting It Out At USCIS—Director Cissna Must Weigh In

From: John J. Pershing [Email him]

"But nothing could be further from the truth. As I predicted in my article two years ago, line employees of USCIS fully support holding immigrants to the law. Remember that five years ago, rank and file USCIS union employees opposed the Obama Regime’s Administrative Amnesty, much like the unions for the Border Patrol and Immigration and Customs Enforcement. "

Based on my first hand experience some years back during the Obama administration at the USCIS office in Durham, NC (I went there at least twice for my wife's citizenship paperwork/interview and swearing in), the above statement is inaccurate (unless Federale and I have a different concept of what constitutes a "line employee" ) except for the local Durham blacks who ran the private contractor security services for the building. They were serious.

The directrix of this office was a 34ish prissy self-important native-stock white female whom I would imagine to drive a Prius plastered with Diversity and Tolerance bumper stickers and her assistant was a black female who had a dress and demeanor suggesting educated African-American, though I didn't hear her speak. Every other CIS employee I saw walking around with a clipboard or behind a sit down or stand up desk with a computer terminal was Latinx, Asian sub-continental or Middle Eastern in dress and demeanor and every one of them I chanced to overhear speak, spoke English with an accent and/or spoke their respective mother tongues with their "customers"—in short, evocative of the UN building lobby during lunch hour. Now, I will concede that this Durham CIS office was still new. Prior to its opening, the only CIS office in NC was in Charlotte.

You might recall a letter of mine  you published about Bedri Kulla, the openly US-Canadian dual national of Albanian origins and CIS officer in this same Durham office who tried pull a Harvey Weinstein on some Salvadoran illegal alien woman. [Immigrants blackmailed for sex, WTVD Raleigh, NC, July 16, 2009] Well it just so happened that my wife's swearing in ceremony occurred a few months after Bedri's sentencing in federal court and that article.

And lo and behold, our prissy directrix of this CIS Center came up to us (and only us--don't ask me why) in the lobby after the ceremony for some extra special congratulations. I'm sure she had no idea what she was getting into and there was really nothing special about my wife's citizenship business, with the possible exception that it was 100 per cent old school legit and our paperwork submissions were as flawless as any barrister could have prepared.  After some very short banter and listening to Miss Priss inanely babble about how she really loved her job of creating "New Americans”, I asked her if she had visited Bedri or gotten any prison letters from him.

My poor wife (who then had her shiny new citizenship document package in hand, complete with a letter from Master Obama) didn't really know what this was all about, but she disapprovingly knew that I was having a prize winning moment of top shelf smart-assery.

The sag in posture and the look on Miss Priss' face was like viewing an accelerated time lapse photography sequence of a potted pansy drying up at high noon in the middle of Death Valley.