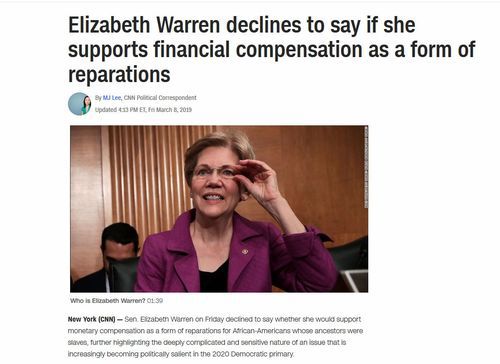 At This Rate, by Next February, Liz Warren Will Personally be Writing a Check to Every Black Voter in South Carolina

Tormenting Senator Elizabeth Warren seems kind of fun. She doesn’t seem to have the natural politician’s knack for avoiding saying something that will just cause more trouble for her later. From CNN:

New York (CNN) … In an interview with CNN in Harlem — a neighborhood of Manhattan rich with African-American history — Warren was asked three times whether she supports money being given to Americans who can trace their roots to slavery. Reparations for slavery in America is often interpreted as financial compensation for descendants of slaves.

Pressed a second time on whether she supports money being given to African-Americans, Warren said she was focused on sparking a national conversation about the issue.

Asked one more time whether she supports financial payment, Warren responded: “I’m saying that there are a lot of scholars and a lot of activists who have put multiple proposals on the table. But we’re never going to get to any of those proposals if we don’t with an acknowledgment of the wrong of slavery and the obligation to address it.”

But CNN didn’t ask her if we shouldn’t also be having a conversation about reparations for American Indians and how much she ought to get.