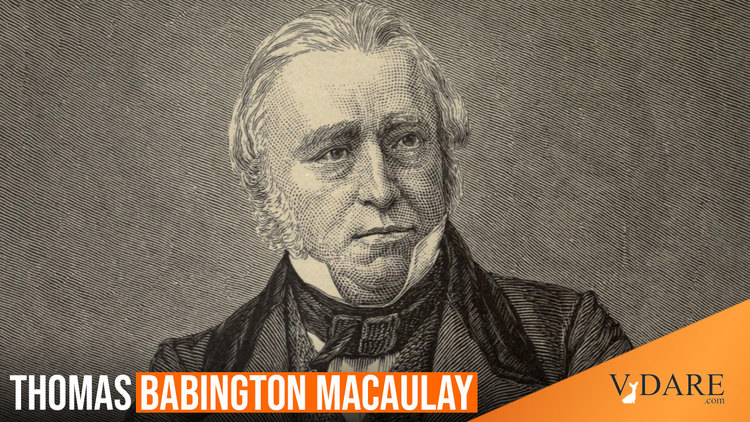 I say then, Sir, that I fully admit the paramount authority of moral obligations. But it is important that we should accurately understand the nature and extent of those obligations. We are clearly bound to wrong no man. Nay, more, we are bound to regard all men with benevolence. But to every individual, and to every society, Providence has assigned a sphere within which benevolence ought to be peculiarly active; and if an individual or a society neglects what lies within that sphere in order to attend to what lies without, the result is likely to be harm and not good.

It is thus in private life. We should not be justified in injuring a stranger in order to benefit ourselves or those who are dearest to us. Every stranger is entitled, by the laws of humanity, to claim from us certain reasonable good offices. But it is not true that we are bound to exert ourselves to serve a mere stranger as we are bound to exert ourselves to serve our own relations. A man would not be justified in subjecting his wife and children to disagreeable privations, in order to save even from utter ruin some foreigner whom he never saw. And if a man were so absurd and perverse as to starve his own family in order to relieve people with whom he had no acquaintance, there can be little doubt that his crazy charity would produce much more misery than happiness.

It is the same with nations. No statesmen ought to injure other countries in order to benefit his own country. No statesman ought to lose any fair opportunity of rendering to foreign nations such good offices as he can render without a breach of the duty which he owes to the society of which he is a member. But, after all, our country is our country, and has the first claim on our attention. There is nothing, I conceive, of narrow-mindedness in this patriotism. I do not say that we ought to prefer the happiness of one particular society to the happiness of mankind; but I say that, by exerting ourselves to promote the happiness of the society with which we are most nearly connected, and with which we are best acquainted, we shall do more to promote the happiness of mankind than by busying ourselves about matters which we do not fully understand, and cannot efficiently control.

There are great evils connected with the factory system in this country. Some of those evils might, I am inclined to think, be removed or mitigated by legislation. On that point many of my friends differ from me; but we all agree in thinking that it is the duty of a British Legislator to consider the subject attentively, and with a serious sense of responsibility. There are also great social evils in Russia. The peasants of that empire are in a state of servitude. The sovereign of Russia is bound by the most solemn obligations to consider whether he can do anything to improve the condition of that large portion of his subjects. If we watch over our factory children, and he watches over his peasants, much good may be done. But would any good be done if the Emperor of Russia and the British Parliament were to interchange functions; if he were to take under his patronage the weavers of Lancashire, if we were to take under our patronage the peasants of the Volga; if he were to say, “You shall send no cotton to Russia till you pass a ten Hours’ Bill;” if we were to say, “You shall send no hemp or tallow to England till you emancipate your serfs?”

I coincidentally read a bit of this passage favorably quoted by George F. Kennan in his book Around the Cragged Hill recently. Three know-nothing ignoramuses who espouse the philosophy of citizenism: Thomas Babington Macaulay, George F. Kennan, and Steve Sailer.