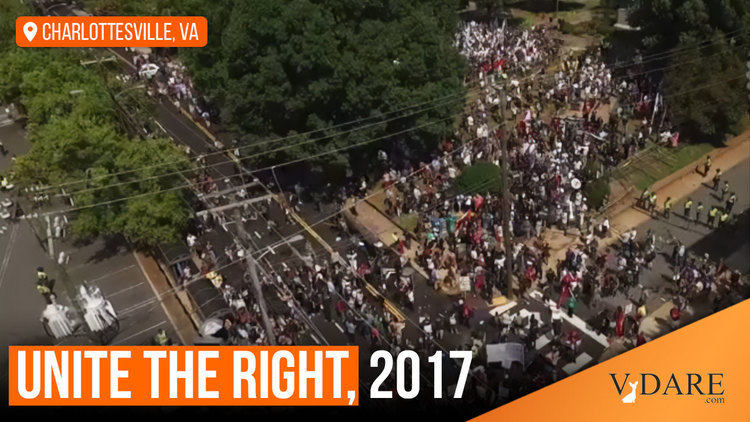 There are eighty-six posts about what we call Charlottesville Narrative Collapse on VDARE.com--the idea that everything you've been told about the 2017 Charlottesville Unite The Right rally by the media and the Democrats is a lie.

Charlottesville was not a "mostly peaceful" demonstration by UTR attendees, it was a genuinely peaceful demonstration, including a traditional American torchlight parade which set nothing on fire, until attacked by Leftist paramilitaries with the aid of local authorities.

That last was one of the first statue topplings of the modern era, and of course it was neither stopped nor punished: 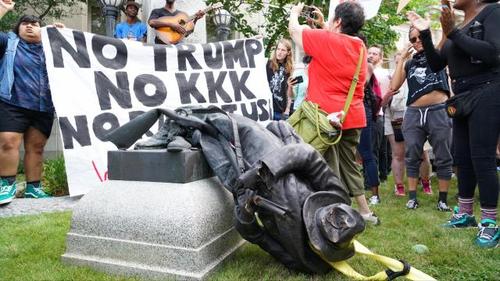 You can donate to support Jason Kessler at GiveSenGgo.com/utr and UTRdefense.org.

And more recently, before the election, we covered Joe Biden's use of the Charlottesville Big Lie to attack Trump...and America.

I'll quote from that last one:

In one of the flatter-toned, yawn-inducing announcements of a VP pick I've ever heard, Joe Biden stood before a non-audience yesterday to tell the electorate he's picked Kamala Harris of California.

It was sorry, boilerplate stuff about "working families," capped off with something like this:

(Not an exact transcript, automatically transcribed by Rev.com).

The reason you have to close your eyes is because you have to blind yourself to months of violent, murderous and destructive rioting by the anti-white left in cities across America.  Antifa and Black Lives Matter have taken over neighborhoods, destroyed businesses, defied the rule of law and otherwise terrorized traditional America—with full support from the media, the Democrats, Big Tech, Big Business, and so on.