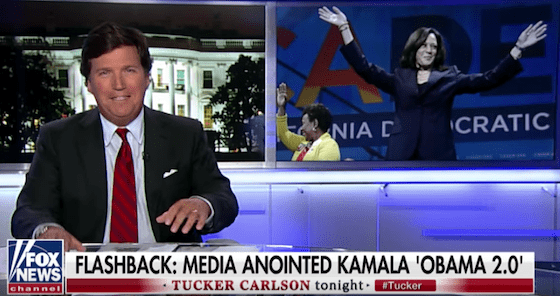 Candidate Kamala Harris Attains The Democrat Ideal Of Diversity Above All

More than a year ago I asked about Kamala Harris, “How pathetic have Democrat politics become when a freshman senator with no accomplishments thinks she can make a credible run for president?”

It’s still a good question, and the answer requires delving into D-party psychology.

Democrat strategists see the California senator as a winner because she conforms so well to current leftish values. At the top of the list is the great god Diversity — and Kamala is a three-fer: she is a (1) female, (2) daughter of an immigrant from India and (3) half-black since her father, the Stanford economics professor, was born in Jamaica.

In 2009, PBS newsreader Gwen Ifill remarked, “There’s a great district attorney in San Francisco whose name is Kamala Harris . . . they call her the female Barack Obama.” So you know that comment got attention among lefty campaign experts to whom the unassailable Obama is the ideal candidate.

Plus, her open borders cred goes back a long time. Kamala has a Youtube channel with videos more than a decade old. One video from 2007 focuses on illegal immigration, where District Attorney Harris states, “Your immigrant status, whatever it is, does not in our minds eye designate you as a criminal.” 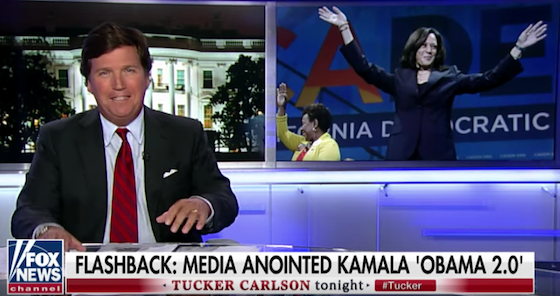 Elizabeth Warren is currently the fan favorite on the Democrat campaign trail, but if a white man becomes the nominee, he will want a diverse vice-president. And Warren seems to have given up on her native American claims of non-whiteness which means Harris is not dead yet.

Kamala is well plugged in to California politics. It didn’t hurt that she was the girlfriend of the powerful Willie Brown for a time who appointed her to a couple of boards. One, the Medical Assistance Commission, met monthly yet paid $72,000 — once again showing that it’s good to have friends in high places.

TUCKER CARLSON: Good evening and welcome to Tucker Carlson Tonight. As the Brett Kavanaugh saga has just reminded us, the left feels no compunction about rooting around in the past of people they don’t like and using what they find to destroy them. The question is, do they apply the same standard to themselves?

Well, today we have breaking news about the past of a well-known progressive, and once again confirms that no, the standards are not the same. We’ll bring that to you in just a minute.

But first tonight, here’s a quick quiz. What exactly do you know about Kamala Harris? Can you name three things she believes? Can you name a single thing she has accomplished? If you’re like most Americans, you cannot. You have no real idea who Kamala Harris is.

The one thing you know about Harris is that she could very easily become the President of the United States, and you know this because you’ve been told it confidently again and again, by geniuses on television:

MSNBC HOST JOY REID: The name I’m hearing now — there was a sheet of people sort of survey of prominent women in politics. Number one name of some — of people — of the person that’s on people’s minds, Kamala Harris.

MSNBC HOST LAWRENCE O’DONNELL: And the politician she reminded me of most then was Barack Obama. Kamala Harris, is now running for President. And she is one of the top tier candidates.

MSNBC HOST CHRIS MATTHEWS,: There’s a new challenger to Trump and she is drawing huge crowds, Senator Kamala Harris of California kicked off her campaign this week and surrounded by — look at that crowd. Trump must be envious as hell.

UNIDENTIFIED MALE: Kamala Harris is probably somebody that on paper has the highest ceiling. You can envision a path for Kamala Harris that quite resembles Barack Obama’s.

CARLSON: Every word a cliche, these people are so stupid. It’s remarkable they can breathe unaided, much less have paying jobs. But whatever. The story they’re telling you, Kamala Harris, she is a star, destined for big things. She is like Obama 2.0, even more woke, with even more diversity points. Out there in America, they love Kamala Harris. She’s a folk hero. She’s like Pete Seeger.

For eight months, they’ve tried to cram that story down your throat, and at times, it looked almost semi-plausible if you closed one eye.

The Washington Post rushed to a rescue, quote, “Kamala Harris’s takedown of Joe Biden was more brutal than it seems.” Look at the headline, yes, brutal. She has dominated the guy. It’s so ludicrous. It turns out she didn’t actually dominate anybody, and she is not dominating anybody.

A new poll from California, obviously her home state which he represents in the United States Senate shows Harris way at the back of the pack. She has now dropped into fifth place. She’s polling at six percent. How bad is that? Well, here’s some perspective.

Harris, by the way, is the daughter of a Stanford professor, which is great, good for her. And yet she somehow pretends she overcame segregation. Right. As Tulsi Gabbard pointed out, Harris is also a former prosecutor. She put others in jail for marijuana, but she now brags about smoking weed herself and listening to rap because she’s cool.

In other words, Harris embodies everything that is grating and unlikable about neoliberals, mindless children of privilege who sneer at those below them for not obeying. It turns out even a lot of faithful Democratic voters find the whole thing totally unbearable because it is unbearable. I mean, really.

Mercifully, it looks like the Kamala Harris campaign is doomed to dry up and blow away, and that can’t come too soon. Even the press appears to have abandoned her. Their new crush, Senator Elizabeth Warren of Massachusetts:

CNN ANCHOR POPPY HARLOW: How consequential was that rally last night? Not just what she said, but the four hours of selfies afterward.

We are just learning the senator took some 4,000 selfies.

CNN ANCHOR DON LEMON: She was out there taking selfies. People waited for hours there to take selfies.

UNIDENTIFIED FEMALE: Yes, 4,000 last night. The campaign says 59,000 since she has started running for President.

UNIDENTIFIED FEMALE: Some people waited four hours to have a selfie taken …

CARLSON: Oh, they are in love. Warren, they are telling you, is a rising star, and actually that’s true. She’s in fact the front runner in the Democratic race. Technically, Joe Biden is polling in first place, but nobody expects that to last. Even Jimmy Carter has given up on Joe Biden. Watch this:

FORMER PRESIDENT JIMMY CARTER: I hope there is an age limit. You know, if I were just 80 years old, if I was 15 years younger, I don’t believe I could undertake the duties that I experienced when I was President.

For one thing, you have to be very flexible with your mind. You have to be able to go from one sector to another and concentrate on each one adequately.

CARLSON: You have to be able to concentrate, unlike Joe Biden. Not a subtle dig. Elizabeth Warren, by the way, would be over 75 years old if she is elected President by the end of your first term, and yet should still be way younger than Joe Biden or Bernie Sanders.

So as of tonight, it looks like Elizabeth Warren by default, but who knows? Now that the press has anointed her, Warren may be doomed, too. That’s never a good sign.