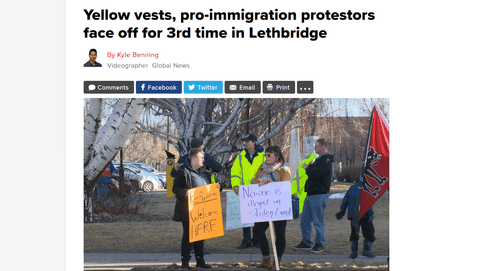 The "yellow vest" protests are continuing in France, though they aren't receiving major news coverage in the English language media anymore. The yellow vests are being used by some anti-immigration protesters around the world, notably in Canada. Once again, patriotic Canadians found themselves confronted by those opposed to the existence of the country.

For the third straight week, both sides of the migrant debate have been out in numbers showing their support for their respective views in Lethbridge.

Yellow vest protesters held their fourth rally in the city on Saturday. The pro-immigration rally, meanwhile, set up right next to them in front of city hall again.

The former is calling on the federal government to step up for the oil and gas sector and for Canada to step away from the UN migrant pact.

While the journalists are policing the protesters on one side, they simply signal boost the pro-invasion demonstrators, letting them ramble on about "hate." Yet one can't help but notice the activist who held a sign reading "No one is illegal on stolen land."

Is all Canada "stolen land?" In other words, is Canada itself illegitimate? And what are the policy consequences of this belief? It would be nice if journalists would ask these questions instead of just serving as stenographers for antifa.
As luck would have it, this week Jared Taylor of American Renaissance did a video on exactly this argument. Be sure to check it out.