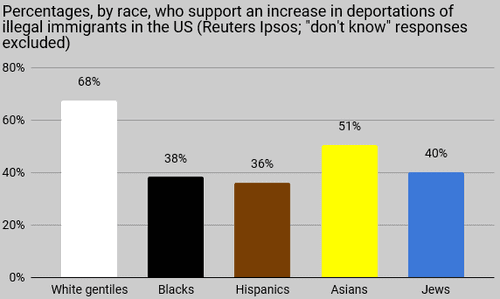 Blacks Invite The World, Supporting Mass Immigration In Spite Of Being "Hardest Hit"

Blacks in America support open borders. They express less support for immigration restrictionism than even Hispanics or Jews do. It’s a perennial fantasy that they’re the biggest opponents of open borders on account of being the ones hurt by it the most.

Libertarians get a lot a grief from us for thinking urban blacks are a natural constituency because the drug war allows police a pretense to throw huge numbers of them into prison and zoning restrictions make it hard for them to bootstrap businesses in the urban core. Libertarians deserve that grief, but we’re hardly any better if we pretend that sticking it to whitey isn’t the primary motivating factor driving black political behavior. Few blacks consciously think through the consequences of bringing in more taxeaters and more competition for a dwindling number of unskilled jobs. And even if the scorpion realizes what stinging the frog will do, he’s still going to sting the frog because he’s a scorpion and that’s what scorpions do.

Black leaders on the right are notoriously supportive of open borders. Kanye West’s embarrassing love affair with Trump came to an end over immigration and token twofer Mia Love trashed Trump over his putative hardline stances on immigration even though giving a half-hearted endorsement of Trumpism during her campaign would’ve won her reelection in 2018.

Black eagerness to invite the world isn’t just a consequence of anti-Republican partisanship. To illustrate as much, results from three different polls in which nothing about partisan affiliation or Donald Trump is mentioned follow. For all questions “don’t know/not sure” responses are excluded.

From a nationwide SurveyUSA poll of 1,000 people, the percentages who describe illegal immigration as a “serious problem”, who support building a wall along the US-Mexico border, and who believe the US should send aid to Mexico to help the migrant caravan: From a Reuters-Ipsos poll of 14,330 people, percentages who support a congressional spending bill that includes funding for a border wall: And from another Reuters-Ipsos poll of 9,138 people, percentages who think the US should increase the number of illegal immigrants that are deported back to their countries of origin: With the marginal exception of deportations–which directly hita lot of Hispanics in the family feelz–blacks are the least supportive of immigration restrictionism of any kind. When Trump or Republicans are mentioned, black sentiment tends to to be even more supportive of open borders than what is represented above, none of which explicitly mentions Trump or Republicans.

It’s political dissolution and the creation of real nations–ethnostates–from the imperial rubble or it’s demographic overrun. There are no other peaceful alternatives.