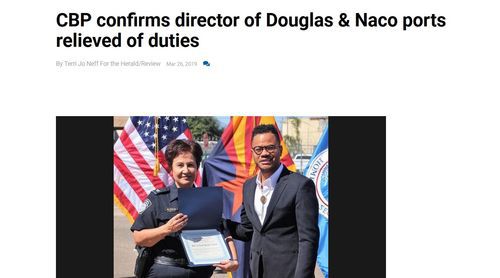 Your correspondent has been remiss on the issue of Hispanic corruption at the border.  The issue is long standing, and an ongoing problem.  Public corruption by Hispanics in Federal service, the immigration agencies, is endemic.  So, once more into the breach.

This time corruption and crime are a family business.

The U.S. Customs and Border Protection (CBP) director of the Douglas and Naco ports of entry is awaiting a decision on whether she will keep her job, the Herald/Review has learned.

Margaret Rose Baldenegro had been area port director since at least 2015 but was relieved of her duties after her son pleaded guilty last fall to transporting undocumented immigrants for profit. Michael Quinonez is serving as acting area port director, spokeswoman Teresa Small said Tuesday.

A decision on Baldenegro’s status is expected soon. In the meantime, she has been temporarily assigned to other duties, sources confirm.

Baldenegro was a twofer for affirmative action, female and Hispanic, but her family is heavily involved in drug smuggling.

Earlier this month, the U.S. Marshals Service apprehended Baldenegro’s son Jaime Joel Rose on a nationwide warrant. He remains in federal detention, according to court records.

Rose, 37, had been arrested by federal agents in August after he crashed his car in the Douglas area while fleeing officers who suspected undocumented immigrants were in the vehicle. He pleaded guilty to transporting three undocumented men in exchange for payment.

A judge allowed Rose to remain out of custody pending sentencing in January on the condition he obey all laws. However, an arrest warrant was issued in December after Rose tested positive for illegal drug use. He also failed to appear for sentencing.

Rose evaded capture until March 15 when marshals took him into custody in Cochise County. He faces up to 21 months in prison when sentenced June 7 on the transportation charge.

Court records also show Rose previously served time in federal prison for a conspiracy to possess 100 pounds of marijuana in August 2012 with the intent to distribute the drug. He was released from prison on that case in May 2017.

Most likely she was long ago identified as a weak link, but was pushed ahead for promotion based on race and sex despite her connections to drug smugglers.

And this is not the only one at CBP who is #CrimingWhileHispanic.  Another illegal alien has been discovered inside CBP.

A former U.S. Customs and Border Protection officer in Arizona was sentenced to a year of probation after pleading guilty to lying about his citizenship on a passport application.

Marco Antonio De La Garza Campos has acknowledged telling authorities that he was born in Texas, when he was actually born in Mexico.

De La Garza, who was sentenced Thursday in Tucson, had worked for the federal agency for six years and had been stationed at the border city of Douglas. He previously served five years in the U.S. Navy.

Over the years, the federal government has been criticized for not performing adequate background checks on people seeking jobs as border officers. The issue usually crops up when the government considers adding a large number of officers at the border.

[Ex-Border Officer Who Lied About Citizenship Gets Probation, By Jacques Billeaud, WaPo, April 2, 2019]

Sadly, the U.S Attorney for Arizona allowed a plea deal where De La Garza got only probation, and consequently he will be eligible to naturalize because of his military service.

He said he lived with his mother in Mexico until he was 19 and that his parents told him when he was growing up that he was a U.S. citizen.

“I should have pushed my parents more for information instead of dismissing it,” De La Garza wrote, adding that he would like to legalize his immigration status in the future.

His attorney, Matthew Green, said in court records that De La Garza will be eligible to apply for naturalization one year after the date of his conviction.

Green wrote that if his client is allowed to remain in the United States, he’ll serve as a stay-at-home father for his two young children, in an effort to reduce family expenses. When they are old enough to go to school, he’ll seek a job, Green wrote.

Generally, persons who make a false claim to citizenship are ineligible for any immigration benefit, and he was apparently not arrested for being an illegal alien either.

Talk about winning the lottery, illegal alien becomes Border Patrol Agent, then arrested and convicted, then gets citizenship.  The new Trump policy.