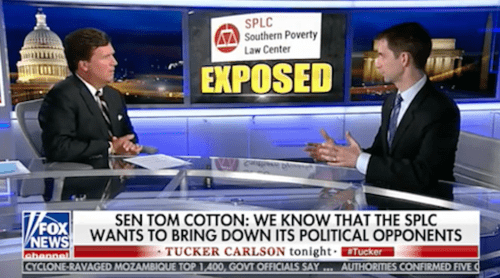 It’s good news that Senator Tom Cotton is requesting an IRS inquiry into the Southern Poverty Law Center, arguably the most corrupt organization ever to get a non-profit designation from US government. (Read his letter here.) Whether the IRS will respond positively is hard to say, but the SPLC certainly has piles of questionable cash. 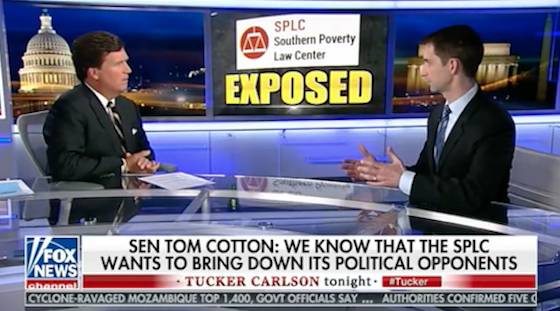 In particular, it’s rather curious for a non-profit to park millions of dollars offshore in the Cayman Islands, a topic that might be of interest to government bean counters. In fact, a March 13 article from the Free Beacon had the headline: Southern Poverty Surpasses Half Billion in Assets; $121 Million Now Offshore.

As Tucker Carlson observes, the SPLC is essentially a shakedown racket, raising money by falsely accusing political opponents of racism or bigotry.

TUCKER CARLSON: The Southern Poverty Law Center recently lost its founder Morris Dees and its President Richard Cohen, after multiple allegations that the organization they ran had become a hotbed of sexual harassment, sexism and racism. But that’s not an SPLC’s only problem right now. It calls itself an anti-hate organization. But in fact the SPLC strongly resembles a racket.

They’ve amassed more than half a billion dollars by calling any enemy of the Democratic Party a racist or an anti-gay bigot or whatever works in an effort to purge them from society.

For doing all of that, they get an indirect government support because they are a tax exempt entity. Senator Tom Cotton is a Republican that represents the state of Arkansas, he recently sent a letter to the IRS urging them to investigate the SPLC’s tax exempt status.

Senator Cotton joins us tonight. Senator, thanks very much for coming on. So just the obvious question first, this is an organization of a small organization that has a half a billion dollar endowment, how are they tax exempt in fact?

SEN. TOM COTTON: So the Southern Poverty Law Center has over half a billion dollars. About a quarter of it, Tucker is parked in overseas accounts as best we can tell. I don’t know many charitable advisers that say it is best practice to send your endowment to overseas accounts in the Caribbean. That’s one reason why Charity Watch gives them an F rating — a very well deserved F rating.

Because as you said, Tucker, they’ve really become kind of a hate group themselves. They have the so called hate map and they use it to stigmatize their political opponents, you know, respectable center right organizations like the Family Research Council, their Alliance Defending Freedom.

It’s fine if you don’t agree with those organizations. There are plenty of groups on the left I don’t agree with, but I don’t try to stigmatize them as a hate group and then go peddle that to CNN, the New York Times to try to attack their donors.

CARLSON: Well, of course. And it’s not a question of disagree — I mean, that you’re not calling for lots of liberal organization to lose their tax exemption, but if you are a clearly fraudulent organization that mismanages your money, and you’re basically running a for-profit organization. How do you keep your tax exemption?

COTTON: And that’s what I’ve asked the IRS to investigate. I mean, funding lawsuits to include left-wing lawsuits and what you think is the public interest is a tax-exempt purpose. Serial repeated defamation against your political opponents is not a tax-exempt purpose. And then talking about misusing funds Tucker, I mean, Morris Dees, the founder there was paid $400,000 a year, apparently to do nothing other than consistently sexually harass young women working at the Southern Poverty Law Center.

CARLSON: And according to its own employees, commit acts of racism even as they claim to fight racism. So is there nobody — so once you receive as a procedural question, once you receive tax exemption from the Internal Revenue Service, do you just keep it forever?

COTTON: So the Internal Revenue Service is responsible for adjudicating initial tax exemptions and then also reviewing it as well. That’s why I’ve asked the IRS to review the Southern Poverty Law Center’s tax-exempt status. They were founded decades ago. They claim that their role was to fund lawsuits to eliminate the Democrat system of Jim Crow and segregation. Now they’ve turned into just a serial defamer of their political opponents. That’s why the IRS needs to relook at their tax-exempt status.

CARLSON: And I hope they will. And what about Media Matters? Which also has tax-exempt status, but which was caught — I mean, without any question at all — coordinating with the Hillary Clinton for President Campaign in violation of federal tax law, and yet they retain their tax-exempt status.

COTTON: So tax-exempt charity should not be coordinating with any political campaign, they shouldn’t be engaged in political activities. I think it says something about the Southern Poverty Law Center that they recently hired Tina Tchen, the Jussie Smollett fixer, Michelle Obama’s former Chief of Staff, to come on and fix their workplace culture, or perhaps take advantage of the $500 million they have and former super PAC to attack the President and the Republican Party next year in the election.

CARLSON: There’s no body that can essentially audit the — I mean, what it needs is an audit, clearly.

COTTON: No, it needs an audit very badly. I hope the IRS will do that as part of their investigation and unveil to the American people that the Southern Poverty Law Center has become nothing but a racket that’s designed solely to slander and defame its political opponents.

CARLSON: So the IRS was caught under President Obama, hurting conservatives, refusing to grant their organization’s tax exemption for purely political reasons and no one was ever really punished for that. Can you get them to pay attention to your request, do you think?

COTTON: I certainly hope we can. The letter that I sent today is just the first step I’m taking to try to get the IRS focused on this serious problem. You have, again a $500 million so called charity that has systematic racial and sexist discrimination problems. And at the same time, it’s simply using that money to target its political opponents. That’s not what American taxpayers are subsidizing when we give people tax-exempt status. We get those things to churches or adoption shelters or shelters for battered women, not to defame your political opponents, sexually harass every woman that works in your office and discriminate against minorities.

CARLSON: It would be nice to get the Civil Rights Division of the DOJ over there. Maybe they can do what they did with Roger Stone.

COTTON: Or the Department of Labor or the Equal Employment Opportunity Commission.