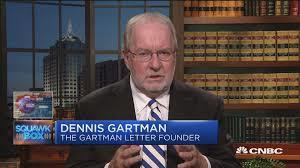 Dennis Gartman, frequently to be seen on financial television shows, is one of the phenomena of this Wall Street era. Single-handedly, from humble origins, he has over the last 40 years built up The Gartman Letter to be the default source of global and macro perspective for a remarkable community of investment houses, hedge funds and commodity traders.

In doing so, he has been extremely careful not to offend the political prejudices of his subscribers. Those who do not know it would probably be surprised to find how Leftist many Wall Streeters are. This stems from ethnic and regional traditions, and from a heavy dose of virtue signaling.

Astonishingly, on Wednesday Gartman took a huge risk by endorsing a Border Wall. This he did with characteristic indirectness by extensively quoting Larry Lindsey, the supply-side economist whose public career abruptly ended when he suggested (correctly of course) that the Iraq War would cost a multiple of what the Bush Administration purported to believe.

…we have found ourselves on the opposite side of the question of immigration for we have always been believers in very open borders here in the US, for as 2nd and 3rd generation immigrants to the country, immigration is what has made… and will continue to make… America great. However, Larry wrote something yesterday which has given us pause and reason to reconsider our view.

It is fashionable to say that there is no crisis on the southern border. But the facts say otherwise. Current illegal border crossings are running about 100,000 per month. That is equal to the total amount of legal immigration in the country.

These people have to be accommodated. For perspective, the entire city of New York has 117,000 hotel rooms. A city like Phoenix has 27,000.

After more similar statistics he went on

One of the key reasons for the current surge is that word has gone out that “you can get away with it” but might not be able to in the future once the wall does go up...Over 90 percent of illegal border crossers never show up for their hearing.

Suggesting that the economic impact of closing the border could be mitigated by intelligent management, Larry Lindsay however did not flinch from the inevitable conclusion:

For Dennis Gartman to depart from years of pro-immigration remarks and risk enraging a significant part of his subscriber base (to say nothing of  jeopardizing his MSM access) by supporting the need for a wall is a truly patriotic act.