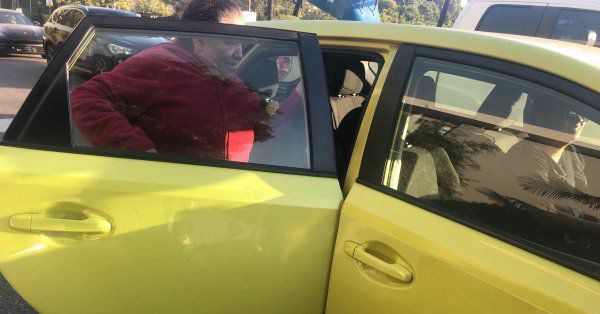 California has declared a state of emergency because of raging wildfires in north and south, fueled by intensely high winds. The Kincade fire, in Sonoma County northeast of San Francisco, covered more than 100 square miles as of Tuesday morning. Millions of residents have had their electricity turned off because Pacific Gas and Electric wants to avoid more billions of dollars lost to lawsuits as happened in earlier fires.

Here’s a tweet from the Times reporter who wrote the article:

There’s not a great facial depiction in the photo above, but it’s better than another photo used in the story that didn’t show the face at all. Could it be that some of the diligent workers slogging through the smoky air are illegal aliens? Inquiring minds want to know…

The Times never forgets about diverse foreigners, no matter how dire the suffering of American citizens. 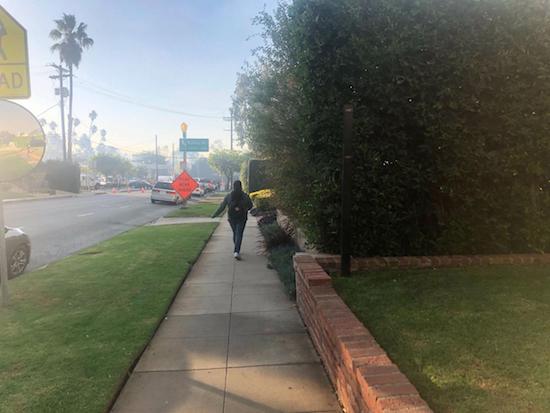 Ana Martinez walks through a neighborhood that was evacuated in the Getty fire on Monday, Oct. 28, 2019. (Brittny Mejia/Los Angeles Times/TNS)

LOS ANGELES – When she left her house about 6 a.m., Carmen Solano didn’t know a brush fire had erupted near the neighborhood where she worked. So she left for her job, with coffee and pan in hand.

She’d filled her red backpack with tortillas, bananas, water and lunch for the day before heading to a home she cleaned weekly on Robinwood Drive. When Solano arrived, via a taxi shared with other housekeepers, the hillside neighborhood lined with multimillion-dollar homes was already choked with debris from the Getty fire.

“There’s a lot of smoke,” the driver observed, as he dropped off the Guatemalan immigrant. Normally, Solano works at the home on Wednesday, but the owner needed to switch and asked her to come on Monday.

Dressed in a pink sweater and pink sweatpants, she rang the doorbell over and over, hoping someone was inside. By her feet, a jack-o’-lantern grinned. As she waited at the front door, she realized she’d either left her phone on her dresser at home or in the taxi.

She was stranded. Ash rained down on her, speckling her braided hair white.

I was the one who informed her that the neighborhood was under a mandatory evacuation and offered her a ride. Before we left, I pressed the doorbell, part of a smart home system that connected to the resident’s cellphone. Solano hadn’t known what it was.

“Esta quemando todo,” the owner said in halting Spanish to Solano through the ringer. “Everything is burning.”

Police had ordered them to evacuate at 3 a.m., he told her.

The streets were mostly empty throughout the neighborhood. Outside homes, residents had decorated with graves, pumpkins and fake spiders for Halloween. Cobwebs decorated manicured lawns. Garage doors were left open as residents hurried to leave. Luxury cars – a black Porsche, a red Mercedes Benz and a Tesla – were left behind.

Solano asked her employer what she should do.

“I’m scared to be alone,” she said, ash smudged above an eyebrow.

He asked if she had a ride home, and I explained to him that I had offered to help: I would drive her to a main intersection and order an Uber to take her home. He thanked me and said to Solano: “Lo siento, gracias por venir” (I’m sorry, thanks for coming.) (Continues)