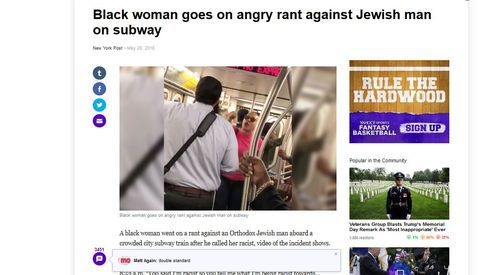 "Black Woman Goes On Angry Rant Against Jewish Man On Subway" Is Not News—Reporting Race Right In The Headline, That's News!

The Yahoo News version of this story has unmoderated comments going across the screen in real time, which is amusing.

It's another "Everyone thinks they're Rosa Parks" moment, but in this case it's white people failing to give up their seats on public transit for blacks that's racist.

A black woman went on a rant against an Orthodox Jewish man aboard a crowded city subway train after he called her racist, video of the incident shows.

The nearly two-minute clip, posted last week by Twitter user @Chrisfrench_, begins in the middle of the heated morning confrontation between the pair on a Bronx-bound 4 train at 8:53 a.m.

“You said I’m racist so you tell me what I’m being racist towards … because you’re Jewish and I said if a Jewish family got on here, somebody would have got up. That is not a racist statement. That is a factual statement,” the woman can be heard yelling at the man as they both stand on the moving train.

Wolfe told the TV station the hubbub began after another African American woman – with three small kids – boarded the crowded train last week and no one gave up their seat for them.

“So this other lady started screaming at everyone around her, saying ‘Why are you guys not getting up? This lady’s here with her three kids,’ ” said Wolfe, who had been standing, “and then she finally said, ‘If it was a Jewish family y’all would have gotten up!’ At which point I said to her, ‘Can we please not make this a racist thing?’ ”[More ]

Of course, trying to remonstrate mildly with blacks violates what we call Derbyshire Rules, as expanded, memorably by Lawrence Auster. Some relevant ones from Auster:

10(m) If you see a black man with his baby daughter who is crying incessantly, do not walk up to him and ask him if the child is all right. Mind your own business.

10(o) If you see a black man drop a beer bottle or other trash outside your home, do not ask him, even very politely, to pick it up.

10(p) If you are walking along a street, and a car with black males in it almost runs you over, do not yell out, “Hey, watch where you’re going!”

10(s) If you find yourself in a subway car with a group of misbehaving blacks, do not ask them to relax or calm down. Do not say anything to them. Promptly leave the subway car. (July 31, 2012.)

Links on the numbers to incidents where whites were brutally beaten or killed for ignoring the Rules. Here's the video, as posted:

The Twitter user who posted the video is black, as you can see by his avatar and the poll he posted.

You can also tell he's black because he thinks black. Two of his follow up comments to that Tweet above are:

No one who is not black would think that it was wrong to watch that video and go with the “angry black woman” narrative.