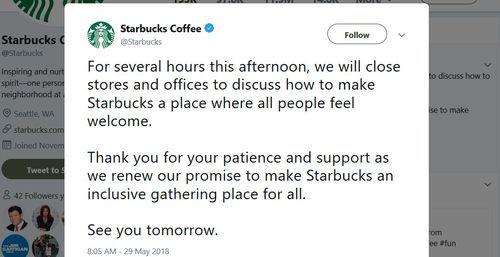 Kudos to the editors at American Thinker for having the stones to publish Colin Flaherty, particularly today’s piece offering about the idiotic shutdown of Starbucks for “bias training.” You know that will entail.

Flaherty observes school teachers have been suffering the same indignity that Starbucks’ employees will suffer today.

Over the last several years, more than 100,000 teachers have gone through the same kind of training to learn how much white people suck.

In most schools, it begins with an invitation to have a “Courageous Conversation” about race. Within a few minutes, the white teachers learn they must be courageous enough to admit their own racism and how it is responsible for so much black dysfunction in America.

[How To Fail Today's Starbucks Racial Sensitivity Training, May 29, 2018.]

I’d love to know how “courageous” these “conversations” are, although they aren’t, Flaherty observes, “conversations.” That word that implies dialogue. These “conversations” are monologues, and in the end, Maoist struggle sessions where whites admit racial sin. “If you want to keep your job and think you are not racist, don't let anyone know about it, or you will meet the same fate as the teachers who said the same thing in their seminars. They get fired.”

This is too bad, because as your average befuddled white guy, there are so many questions I want to ask, yet so few answers.

Maybe we will hear about some of them on the MSNBC special about "Everyday Racism," broadcast the same night as the re-education of the 177,000.  How about a few quick ones?

Chicago was forced to pay $22.5 million for its role in a group of black people tossing a young white woman out of a tall building.  A Harvard sociologist told the judge and jury that anytime a white person is in a black neighborhood, he can expect to experience Routine Activity Theory — i.e., black people routinely visit violence on white people.

The judge made it part of his ruling.

Question 1: Why is black-on-white violence so routine that they even have a name for it?

Question 2: Why are black-on-white crime and violence 6, 10, even 1,000 times greater than white-on-black violence?

Question 3: Why do black people – like Michelle Obama – get special preferences for college admission based on race?

Question 5: And why are so many reporters and public officials in denial, deceit, and delusion about it – even when we have so many videos, victims, police reports, 911 calls, and witnesses that tell us about it?

Question 6: Why are so many indicators of black health and well-being off the charts in a bad way?  You know what I am talking about: HIV, AIDS, blood pressure, drug addiction, alcoholism, and other lifestyle diseases.

Question 7: How long can you pretend black-on-white hostility and violence have not ruined so many lives, so many cities?

Question 8: Do you think it is safer for a white people to move into a black neighborhood or vice versa?

Question 9: What about black-on-Jewish violence, so wildly out of proportion?  Ditto for black on gay, black on young, black on old, black on women, black on Asian, black on kitties, puppies and turtles and raccoons? All documented at minds.com/ColinFlaherty and in that scintillating bestseller Don't Make the Black Kids Angry.

Question 10: Why are so many black people in prison?  Why so many expelled from school? Do white people do it too, but they just don't get caught?

Question 12: Should white people ever call the cops when black people break the law?

Question 13: Why are there so much crime and violence at hip-hop concerts and other black events but none at PGA golf events?

So many questions; so much denial, deceit, delusion, and danger about black criminality and violence. It is the greatest lie of our generation: the hoax of black victimization.

Yes, it is the greatest lie of our generation, perhaps next to the claim that immigration makes us  “who we are.” Frightening thing is, so many young people of the age to work at a Starbucks, or another megachain, actually believe they are bad because they are white.