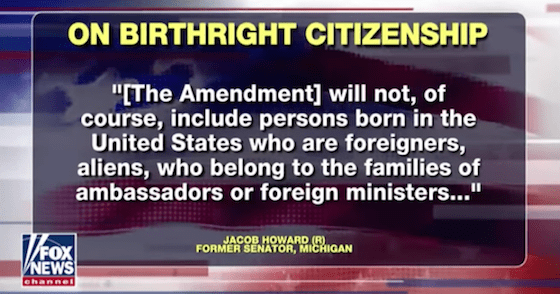 David French of National Review has been in whiny surrender mode for years, but Trump's suggestion that the US stop granting citizenship papers to children born to illegal aliens enrages him:

Attempting to end birthright citizenship through an executive order (should Trump carry through with his threat) would be the most egregious attempted abuse of executive authority -- outside of unilateral presidential military actions -- in my lifetime.

This is nothing new: see NRO Goes All In For The Right To Birthright Citizenship—And Will Be Puzzled Again When Trump Wins. We have years of anti-birthright citizenship material on hand, tagged "Birthright Citizenship Reform," but start with Weigh Anchor! Enforce the Citizenship Clause, which covers the history of the ratification of the Fourteenth Amendment, never intended to give citizenship to the children of Mexican illegals, and go on to my Children of an Invading Army, which points out the absurdity of the thing:

This is an interpretation of the Fourteenth Amendment, and it's stupid. Ann Coulter wrote in The Hill that

The United States is one of only two developed countries in the world (the other is Canada, and even it has some restrictions we don’t have) with full “birthright citizenship,” meaning that any child born when his mother was physically present within the geographical borders of the U.S. automatically gets a U.S. birth certificate and a Social Security card.

That means legal immigrants, pregnant women sneaking in on tourist visas, travelers on a three-week vacation, cheap foreign workers on “temporary” visas and, in some cases, foreign diplomats.

There are laws on the books that say the kids born to diplomats don’t automatically become citizens simply by being born here but — like so many of our immigration laws — these are treated as mere suggestions.

And that’s not all.

We’re the only country but two that confers automatic citizenship on children born to illegal aliens, or “anchor babies.” This is not “birthright citizenship,” which refers to children born to legal immigrants. (There’s nothing vulgar, bigoted, racial or sexual about the term “anchor baby.” It’s a boating metaphor: A geographical U.S. birth “anchors” the child’s entire family in this country by virtue of the baby’s citizenship.)[More]

Some people do think the constitution should be amended to say that the Fourteenth Amendment doesn't mean that Mexican illegals can sneak in, give birth, and stay forever. The Huffington Post responded to this suggestion by saying Sorry, Republicans: Ending Birthright Citizenship Would Be Unconstitutional.

That's right: at the Huffington Post they think it's unconstitutional to amend the Constitution if minorities are hardest hit.