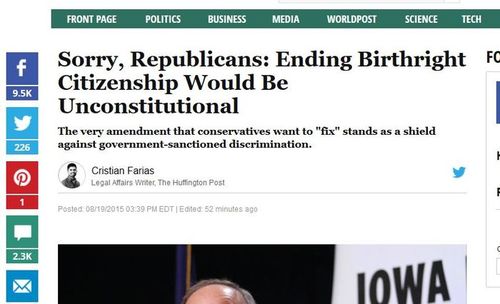 It is nonsense to say that an Amendment to the Constitution could be unconstitutional. The writer is saying that any plan that "squarely targets Latinos" is unconstitutional under "disparate impact theory", as found by the Supreme Court in the 14th Amendment. [Sorry, Republicans: Ending Birthright Citizenship Would Be Unconstitutional| The very amendment that conservatives want to "fix" stands as a shield against government-sanctioned discrimination, By Cristian Farias, Legal Affairs Writer, The Huffington Post, August 19, 2015]

The theory is briefly:

So ending "birthright" citizenship would be unconstitutional.

No one is proposing that, but you know, the Civil War has been over for some time, so it's probably no longer necessary, and it's led the Supreme Court into some weird and strange jurisprudence, notably that "disparate impact" thing.

But there's a different question, not involving constitutional scholarship, but rather power politics.

Would the Supreme Court find such an Amendment unconstitutional? Answer: who knows? The Supreme Court might find anything. That's why we keep talking about impeaching judges.