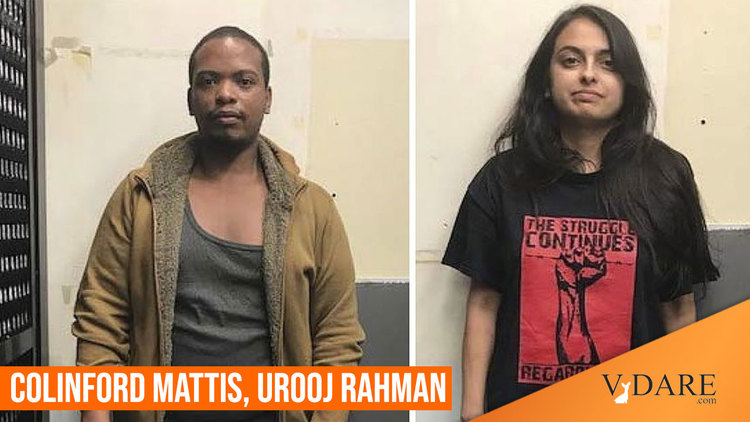 In the land of Anarcho-Tyranny, being black or an immigrant is a get-out-of-jail-almost-free card, even if you conspired to murder police in a domestic terror attack. But being white and protesting a stolen election means torture in a D.C. Jail.

Unbelievably, or not, the Biden Regime has permitted Urooj Rahman, a Pakistani immigrant, and Colinford Mattis, a garden-variety angry black American, to plead guilty to lesser crimes than those to which they pleaded last year [New York Lawyers Plead Guilty to Conspiracy in Molotov-Cocktail Case, by Deanna Paul, Wall Street Journal, June 2, 2022]. During the Floyd Hoax Riots in New York City, they made a Molotov cocktail, and tossed it into a police car. They were nearly sentenced as domestic terrorists, but alas and alack, the Let’s Go Brandon regime inked a better deal for them.

Two lawyers involved in throwing a Molotov cocktail at an NYPD car in 2020 pleaded guilty to a charge that could lead to a shorter prison sentence https://t.co/RRuQsUJd5K

They pleaded guilty last year to a count of possessing and making an explosive device, which could have meant 10 years in prison. But with the new agreement, they withdrew that plea, and instead pleaded guilty to simple conspiracy to assemble the bomb and damage a cop car. They’ll skate free in two years or less if the judge accepts the regime’s sentencing recommendation.

That was entirely unlike the “harsh position taken by the Biden Justice Department on many of those accused of rioting on January 6th,” liberal law professor Jonathan Turley observed [New York Attorneys Accused of Firebombing Police Car Given Generous Plea Deal, Jonathanturley.org, June 5, 2022]. “Attorney General Merrick Garland cited the threat to police officers in pledging an unprecedented effort to charge and convict those involved ‘on any level’ in the riot.”

The two lawyers were facing domestic terrorism charges and the possibility of 30 years in jail. This week, the Biden Administration agreed to a massive reduction of the charges in a plea agreement that will likely result only in a couple years of jail time.https://t.co/dLCKAWqzqv

Yet the two lawyers who made bombs and tossed one in a police car “will now be given sentences closer to tax fraud than terrorism.”

What a contrast to what the J6 protestors have suffered.