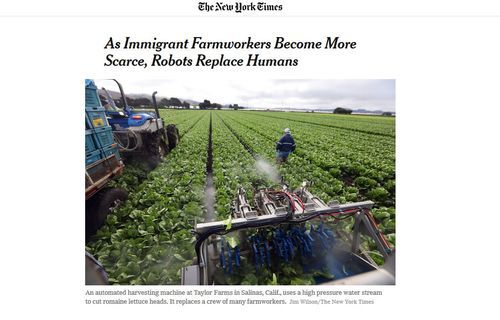 The supposed need for more agricultural laborers has, since the days of slavery, been a major justification for the use of cheap labor. In the long run though "cheap labor" is anything but cheap.

As agriculture continues to be mechanized/automatized/robotized, this excuse is less and less valid, if it ever was. Even the New York Times is discovering agricultural mechanization, though I doubt it will change the paper's immigration outlook.

A Times article (with some good photographs) by longtime immigration reporter Miriam Jordan starts out in frustrated novelist mode, telling the story of the family of an Hispanic farm laborer.

SALINAS, Calif. — As a boy, Abel Montoya remembers his father arriving home from the lettuce fields each evening, the picture of exhaustion, mud caked knee-high on his trousers. “Dad wanted me to stay away from manual labor. He was keen for me to stick to the books,” Mr. Montoya said. So he did, and went to college. Yet Mr. Montoya, a 28-year-old immigrant’s son, recently took a job at a lettuce-packing facility, where it is wet, loud, freezing — and much of the work is physically taxing, even mind-numbing. Now, though, he can delegate some of the worst work to robots. Mr. Montoya is among a new generation of farmworkers here at Taylor Farms, one of the world’s largest producers and sellers of fresh-cut vegetables, which recently unveiled a fleet of robots designed to replace humans — one of the agriculture industry’s latest answers to a diminishing supply of immigrant labor. The smart machines can assemble 60 to 80 salad bags a minute, double the output of a worker.
As Immigrant Farmworkers Become More Scarce, Robots Replace Humans
by Miriam Jordan, New York Times, Nov. 20th, 2018

Taylor Farms is getting with the times.

Enlisting robots made sound economic sense, Taylor Farms officials said, for a company seeking to capitalize on Americans’ insatiable appetite for healthy fare at a time when it cannot recruit enough people to work in the fields or the factory. A decade ago, people lined up by the hundreds for jobs at packing houses in California and Arizona during the lettuce season. No more. “Our work force is getting older,” said Mark Borman, chief operating officer of Taylor Farms. “We aren’t attracting young people to our industry. We aren’t getting an influx of immigrants. How do we deal with that? Innovation.”

Imagine that, "Innovation", rather than hiring cheap labor.

The article goes through some obligatory paragraphs about the need for laborers, and how immigration crackdowns are making it difficult for employers, crops rotting in the fields, etc. That's probably part of the NYT style guide. But then it says this:

California’s $54 million agricultural industry cannot afford to wait. As the country’s epicenter of both technology and agriculture, the state is leading the move to automate in the fields and packing plants.

Historically, some crops have been easier to harvest by mechanization than others. American wheat farming, for example, has been mechanized since the 1800s so you didn't have gangs of foreign workers harvesting wheat.

I grew up on a farm that raised wheat, alfalfa hay and corn, and it was all mechanized since before I was a kid.

And nowadays, just about any crop can be, or is about to be, harvested by machines. My nephew has worked in cotton farming, and it's mechanized now. If you remember your American history, you know that cotton farming had a big role in a certain kind of very cheap labor once practiced in this country.

Driscoll’s, the berry titan based in Watsonville, Calif., has invested in several robotic strawberry harvesting start-ups, including Agrobot, which uses imaging technology to assess a berry’s ripeness before it is harvested. It is currently in test phase. Last spring, Christopher Ranch, a giant in garlic, began using a 30-foot-tall robot to insert garlic buds into sleeves, the nets into which they are bundled for sale in supermarkets. “It’s a real workhorse,” said Ken Christopher, executive vice president of the company, whose headquarters are in Gilroy, Calif. “We can do more in a half shift than we could do in a full shift.” Bartley Walker, whose family business rents and sells tractors, now offers a robotic hoeing machine with a detection camera capable of identifying the pesky weeds that sprout between row crops like broccoli and cauliflower. “The weeder is not as precise as a human with a hoe,” Mr. Walker said, “but it extracts 90 percent of the weeds.” What is more, one machine replaces 11 workers.

About 60 percent of the romaine lettuce and half of all cabbage and celery produced by Taylor Farms are harvested with automated systems. The company has partnered with an innovation firm, which previously focused on automated vehicle assembly, to develop a machine to begin harvesting broccoli and iceberg lettuce within two years. All told, the company plans to double the number of automated harvesters, which cost about $750,000 each, in the fields each year—until nearly everything can be machine-picked.

Mechanization is here folks. Even the New York Times is noticing. We don't need more agricultural laborers, if we ever did. So don't let them use that excuse.