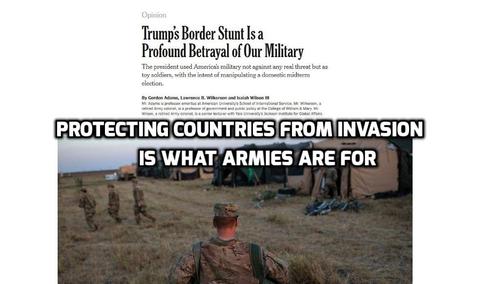 NYT: "Trump’s Border Stunt Is A Profound Betrayal Of Our Military." Unlike Our SEVEN Anti-Muslim Wars?

An op-ed in the New York Times:

Trump’s Border Stunt Is a Profound Betrayal of Our Military

The president used America’s military not against any real threat but as toy soldiers, with the intent of manipulating a domestic midterm election.

By Gordon Adams, Lawrence B. Wilkerson and Isaiah Wilson III

The American military should only be used to protect vital American interests, such as those found in the Sahara and the Hindu Kush, rather than to protect trivial objectives like preventing a column of young foreigners from marching across the United States border.

Moreover, it’s inhuman to force American troops to sit around in America merely to deter border incursions of their homeland when everybody knows they are dying for some of that downhome Libyan cooking after a hard day fighting tribesmen they were on the same side as as recently as last month. From Defense One:

The U.S. military is officially fighting wars in seven countries, according to the White House’s latest war report. Known formally as the “Report on the Legal and Policy Frameworks Guiding the United States’ Military Force and Related National Security Operations,” the unclassified portion flags ops in Afghanistan, Iraq, Syria, Yemen, Somalia, Libya, and Niger — all under the banner of the same war authority granted in the 2002 Authorization for the Use of Military Force to fight al-Qaeda-linked militants.

Afghanistan, Iraq, Syria, Yemen, Somalia, Libya, and Niger. That’s where Americans belong, not Texas, New Mexico, Arizona, or California. Our men in uniform should only protect countries that Americans cannot:

A. Find on a map
B. Spell
C. Ideally, don’t dare try to pronounce

When George Washington warned against “foreign entanglements,” he meant our troops should be fighting perpetually in Somalia in some endless war of clan against clan. Our national grand strategy must remain:

Most of all, America must never fall so low as to mind our own business. Our philosophy must always be: