SBPDL NOTE: It's coming! Because We Live Here: The Paul Kersey Anthology! Secure your signed copy by contacting me at SBPDL1@gmail.com. A $25 donation gets you a signed copy!

Previously from Paul Kersey: CeaseFire! Blacks in 70% Black Baltimore Challenged to go Three Days (Aug 4 -6) with “Nobody kill Anybody” Campaign 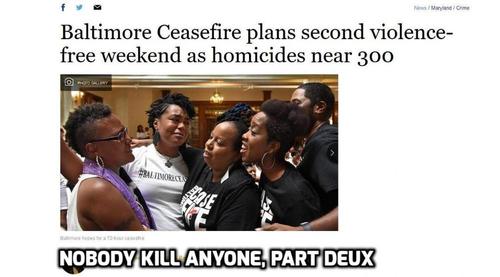 As you can see above, there was a murder in Baltimore—DC police officer Tony Anthony Mason Jr., 40, shot dead tonight.

This the second  failure of the "Nobody Kill  Anybody" campaign in Baltimore—see below.

If you've read The City that Bleeds: Race, History, and the Death of Baltimore, you know black people in Baltimore carefully protect their city by using black criminality to keep white people from ever being a demographic threat to their running things. 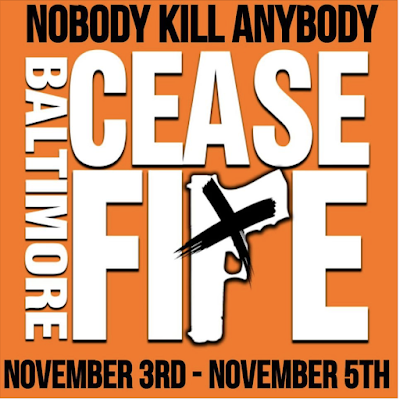 Nobody Kill Anybody... Part Deux

But for one fleeting moment in time, black people came together in 70 percent black Baltimore to call for a 72-hour ceasefire. In a city where black on black violence over the pass decade dwarfs the lynchings in America we hear so much about (as justification for contemporary hatred of whites mandated by the state through public education), blacks came together to initiate a ceasefire over the weekend of August 4-6, 2017.

Unfortunately, blacks couldn't be compelled to keep the guns holstered for a little more than 24 hours.

The tagline of this effort (rooted solely in the prevailing blackness enveloping the city in an African quality of life) was "Nobody kill anybody for 72 hours."

In the absence of whites in Baltimore, western civilization gave way to the type of community Africans in America could collectively create.

"Nobody kill anybody for 72 hours" is a fitting slogan to remind white people still with their heads in the sand it's time to finally understand the consequences of blackness.

Not everyone was listening to a cry for help (hoping against the genetic reality of the quality of life blacks create anywhere they are found in the world) no white community has ever had to make. [Amid calls for a ceasefire, the familiar sound of gunshots in Baltimore, Baltimore Sun, August 5, 2017]

So if at first you don't succeed, try and try again..

As homicides mount, Baltimore residents are again calling for a weekend without violence.

The second 72-hour Baltimore Ceasefire is scheduled Friday through Sunday, with events planned around the city each day in an effort to curb the city’s rising number of killings, now near 300.

“We’re doing ceasefires quarterly because we saw what the first one did, how much hope it gave the city,” said Erricka Bridgeford, one of the event’s founders.

By Wednesday afternoon, 297 people had been killed in the city this year. The city has recorded more than 300 homicides each of the previous two years. Before 2015, the city had not recorded 300 or more homicides since 1999.

The first ceasefire event was held in August as the city’s homicide count stood at 188. The event included marches, cookouts and vigils across the city. The weekend was pierced by violence — including at least two homicides — but still a success, organizers and attendees said.

It wasn’t the first attempt at a violence-free weekend in the city this year. On Mother’s Day weekend, the group Mothers of Murdered Sons and Daughters United, or MOMS, called for a ceasefire. At least four people were shot that weekend, including a 59-year-old man and a 17-year-old woman who were killed.

Despite the continued violence during the August ceasefire event, Bridgeford said she and others are undeterred as more residents feel empowered to do something about the violence.

“People are more aware about their own response to murder. It makes them think, ‘What is one even small thing I should be doing to make my city a better place?’ ” she said.

Since her first ceasefire event, Bridgeford said, volunteers have passed out 20,000 fliers and displayed 2,000 posters. But more importantly, she said, volunteers are sharing resources and having conversations about the root of the violence.

Bridgeford said more people are beginning to realize the problem does have solutions. “Before, we didn’t realize,” she said.

She used the analogy of a dark room being lit with just one candle. “It is extremely dark, but we are turning on our lights little by little.”

Among the events scheduled this weekend will be a human chain that will form along Edmondson Avenue, from Hilton Street to Cooks Lane, from 2 p.m.to 3 p.m. Friday; a poetry slam hosted by Sisters Saving the City at 4 p.m. Friday at 4236 Pimlico Road; a candlelight vigil from 6 p.m. to 7 p.m. Friday at Elderslie Methodist Church, 5601 Pimlico Road; and an event called “Sacred Space Saturday,” in which people are encouraged to place a balloon or something visible at the space where their loved one was killed.

Last time, the black population made it roughly 36 hours into the ceasefire before black violence flared up and ended the dream of a weekend free of murder.

How long can they make it this time?