"The Theatre at 30th Street"

On August 9, 2014, just before noon, 6'4," app. 300 lb. black thug Mike Brown committed a strong-arm robbery of the Ferguson Market and Liquor, in Ferguson, Missouri, with his crime partner, fugitive from the law Dorian Johnson.

(According to the medical examiner, Mike Brown's corpse weighed 292 lbs., but that was after substantial blood loss.)

Brown and Johnson then walked away from the Market up Canfield Drive, but instead of walking on the sidewalk, made a point of walking up the middle of the street, blocking traffic.

White Ferguson PD Officer Darren Wilson drove past the two, asked them to get out of the street, and Brown responded that he'd do what he bleepin' pleased.

Just after passing the two, Wilson noticed that they matched the descriptions of two perps he'd just gotten a call about for the Market robbery, and backed up to the suspects.

At that point, Brown committed assault and battery against Officer Wilson, and tried to murder him with his service weapon. Officer Wilson, however, decided that it was not a good day to die, and shot Brown dead.

What followed was one of the ugliest race hoaxes since… well, since the Trayvon Martin Hoax two years earlier.

And it was no mystery why-most of the major players were the same: the John Doe calling himself "Barack Obama"; Criminal General Eric Holder; the Lügenpresse.

And so, before you could say, "racial profiling," we had yet another national race hoax on our hands.

Black street thugs began rioting in Ferguson, before Brown's corpse was even cold. The corpse lay in the middle of Canfield Drive for four hours, because black thugs had begun screaming and firing guns, and police told the civilian mortuary people to stay in their vehicles, because the cops couldn't guarantee their safety. Again, while black racists were solely responsible for Brown's corpse laying in the street for four hours, they turned facts and morality upside down, and blamed "racist" police for that, too.

Dorian Johnson, local "members of the community," and then the mainstream media promoted the blood libel, whereby Brown had begged for his life, crying out, "Hands up, don't shoot!," but Officer Darren Wilson had ignored Brown's pleas, and instead shot him in the head, and then, with Brown on the ground, shot him in the back four or five more times.

Heavily "militarized" police showed up but did nothing to stop the rioting.

Black supremacist criminals burned down much of Ferguson's main drag.

The White House and the MSM put intense pressure on St. Louis County authorities to railroad white hate crime victim, Officer Darren Wilson. Some media organizations went so far as to publish his and his new bride's street address, in order to aid and abet in their lynching. Eventually, Officer Wilson felt he had to quit his job.

Even though he did not believe that Officer Wilson had committed any crime, in November 2014, St. Louis County Prosecutor Robert McCulloch convened a grand jury on the shooting of Mike Brown. Although Officer Wilson was not legally obligated to testify (since anything he said could be used against him), he did anyway.

Blacks across the country initially demanded that Prosecutor McCulloch be removed from the case, and be replaced with a special prosecutor. McCulloch was notorious for his lack of hatred for white policemen. On top of that, his own policeman father had been murdered by a black man during his childhood.

On November 24, when Prosecutor McCulloch announced that the grand jury had declined to indict Office Wilson, blacks again did what everyone expected them to do: They rioted, burned down buildings, and looted in Ferguson.

Phelim McAleer, an Irish immigrant journalist living here, saw the national hubbub, and assumed that an American would dramatize it. He waited… and waited. In vain.

Finally, he got tired of waiting, and wrote this play.

McAleer wrote a docudrama. Words like "documentary" have been so dragged through the mud that one may wonder whether it is worth using them anymore. Well, the communists have ruined the entire English language, including "and" and "the," so there's no point in trying to use alternate terms.

As McAleer told me, he was solely concerned with "the truth." And so, he relied entirely on the grand jury transcripts.

That's the whole play. That's why he called it, Ferguson: Truth Matters.

A source told me that McAleer has relentlessly promoted his play, and that he meets daily with different scribes at a nearby watering hole. The night I saw the play, he and his lovely wife sat down with a contingent from VDARE.com.

Once he wrote the play, people immediately sought to sabotage the undertaking. An actor joined the ensemble cast, and started talking about the need for "balance" (read: lies).

McAleer got rid of him.

About 20 years ago, a white man wrote a politically incorrect play on race. A black actress won an audition for the lead role, and agreed that she would go on, regardless of whether she agreed with the play.

She was lying. She waited until the eve of the show's opening and quit, just as she had planned to do, all along. As far as I know, she succeeded in killing the play.

At least, I figured, McAleer's play had the advantage, whereby if someone up and quit at the last minute, he could read from the grand jury minutes, the way I had seen actors work at a reading of an unstaged play 30 years earlier, a mile up the road at Playwrights' Horizons.

Fortunately, it didn't come to that.

They are a gifted lot.

He and his players got around the naturally static courtroom situation by wreaking havoc with it. Witnesses walk around while testifying, sit next to each other while testifying, touch each other, pairs testify in tandem, a prosecutor physically holds back a witness.

The most disturbing moment, in terms of courtroom procedure, comes towards the end, when a weeping, black female prosecutor (Kim Brockington) tries to coax a black female witness (Renika Williams) into testifying that Mike Brown had raised his hands in surrender, before Officer Wilson shot him dead.

The prosecutor weeps. The witness weeps. The latter shouts that Brown started raising his hands, only to ball up his fists and charge at Officer Wilson, forcing the latter to shoot him dead.

It would have been profoundly unprofessional for a prosecutor to act that way. A source told me that that was the actress' decision.

It's a very powerful movement-if you're not bothered by breaches of courtroom etiquette or prosecutorial professionalism.

An early dramatic high point came when Mike Brown's friend, "Mark Williams" (Chaundre Hall-Broomfield), testified. Williams had claimed to the FBI that he had seen Officer Wilson shoot a wounded, prostrate Brown four or five times in the back, but on the stand, a white man prosecutor (Kevin Sims) gets him to confess that he hadn't seen anything of the sort.

(Williams' testimony tells us, by the way, that Brown's natural mother, Lesley McSpadden had not raised him. His grandmother had, and she did not like him, so he had moved in with Williams' family, about a week before he tried to murder Officer Wilson.)

Another dramatic high point comes when Officer Darren Wilson testifies of the confrontation and Brown's attack, that Brown was so big and strong that Wilson didn't know how he was going to survive.

There were comical moments, both involving white witnesses. One was a notorious, middle-aged, white lady named "Susan White" (Carol Todd) who claimed she'd happened to drive on Canfield Drive a few days after the incident, and who testified that she cared about blacks, but whose testimony was then impeached by a prosecutor. (Her real name Sandra McElroy, which has been all over the MSM.) He brought up Internet comments she'd made about "n——s" right after the incident. "White" proved to be mad as a hatter.

A funnier moment involved two white witnesses (who sit next to each other) who had been near the incident, and whom Mike Brown had engaged in conversation that morning.

The humor derived from the friction between the two. Witness A said that he was a contractor, and that Witness B was a laborer working under him. B then contradicts him, testifying that he is in fact an accountant who runs the company's marketing division, and who was just helping out A, who was the real laborer.

A weird moment occurred early in the play when Dorian Johnson (Cedric Benjamin) recounts the indignant shock he felt that the South Asian store clerk had actually had the temerity to call the police after they'd committed strong arm robbery against him.

The site is an intimate, off-Broadway theater, on the corner of West 30th Street and Eighth Avenue. It official name is "Urban Stages," but that's not the name in the playbill, which calls the venue, "The Theatre at 30th Street."

Apparently, management refused to permit the production to use its name.

The explanation for this can be found in a disclaimer that Urban Stages posted on its Web site, where it advertises current and future shows.

" - This is not an Urban Stages' production. The views expressed in this production do not necessarily reflect the position of Urban Stages. - " 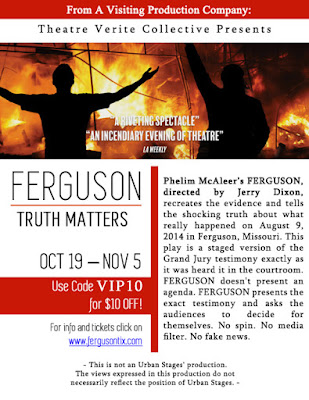 It turns out Urban Stages is a Communist outfit!

It was started by a white lady named Frances Hill, and produces the sort of fare that the New York Times calls "fearless."

(They perform in schools, libraries, and senior centers.)

"There really is an attitude that other voices, other than the dominant culture, just aren't important. And Frances has a different attitude….

"When you have that kind of programming, it starts to cut away biases. If you're only seeing the same images and hearing the same stories over and over again, it reinforces an idea that the world is one way, and that there is only one story, and the fact is there are as many stories as there are people, and I think that Frances is interested in telling as many of those stories as possible."

The "dominant culture" is anti-white multiculturalism (Communism). If Pinkins were uttering a tautology, it would be impossible to argue with her. But she is dog-whistling. When she says "the dominant culture," she means "white culture," thereby repeating something we hear every hour of every day, such that it is part of the banality of evil.

Well, it's a happy irony that a Communist theater dedicated to silencing whites permitted the staging of the play about the attempted legal lynching of Darren Wilson. That's something to be grateful for.