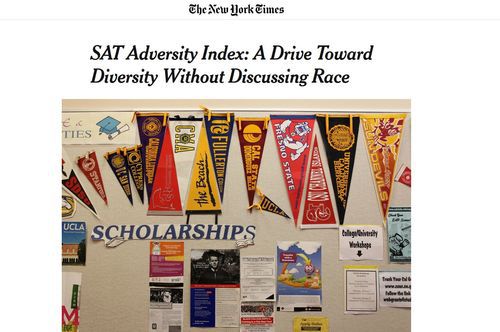 As Dan Quayle Said: "Adversity Is Our Strength"

SAT Adversity Index: A Drive Toward Diversity Without Discussing Race

That’s quite a line-up.

The decision to give students who take the SAT test a numerical rating that reflects the challenges they have overcome in life is the most telling sign yet that universities across the country are searching for ways to diversify their classes without considering race or ethnicity.

In other words, they are looking for a magic way to continue to impose racial preferences without preferring race, just by obvious proxies for race. You know, in case the Supreme Court starts to notice that pesky bit in the 14th Amendment about “equal protection of the laws.” Back in 2003, the Supreme Court put a 25 year limit on race preferences, and we’re now 16/25ths of the way there.

The so-called adversity rating gives admissions officials a way to learn about a student’s neighborhood and school, factors that have been found to help or hurt academic achievement. The score, which does not account for the student’s race, will be part of an Environmental Context Dashboard sent to colleges in addition to test results.

You know what would predict SAT scores really accurately? Percentage of soda sales in a zip code’s shops that were grape-flavored. Also, percentage of cigarettes sold that are menthol.

With the plan, the College Board, which administers the SAT, is joining a broadening movement among all levels of education toward using race-neutral alternatives to affirmative action. …

The new tool for the SAT, a standardized exam taken by two million students each year, gives the movement toward race-neutrality perhaps its biggest boost, distilling the complexities of disadvantage to a simple number from 1 to 100. It anticipates a time when the American higher education system may move beyond considering race, in favor of factors like poverty, crime-ridden neighborhoods and struggling schools.

By the way, I’m opening a new charter school:

If you mention your child’s school by name during your Emmy, Oscar, or Grammy award acceptance speech, your child gets all As!

“Considering that students of color that apply have higher disadvantage levels on average, it’s hard to imagine that using the dashboard would not lead to an increase in racial diversity,” said Michael Bastedo, a professor of education at the University of Michigan. …

Selective high schools in Chicago now admit 30 percent of their students based on grades and test scores, and turn to socioeconomic factors for the rest.

The district uses a complex formula that analyzes the city’s census tracts for six factors: median family income, percentage of single-parent households, adult education level, percentage of owner-occupied homes, percentage of households in which English is not the first language and achievement scores of neighborhood schools for students living in the census tract.

They could make the system even more accurate at predicting SAT scores by asking whether the student likes baseball or basketball more, rock or rap, Seinfeld or Family Matters?

The College Board’s new tool for the SAT is in some ways an expanded version of this, using 31 factors related to the test taker’s neighborhood and school. It does not account for individual circumstances. …

The College Board’s plan comes as challenges to affirmative action are making their way through the courts or in federal investigations….

Harvard says it does not discriminate, and at trial the university argued that considering socioeconomic factors alone would not bring in enough minority students of the academic caliber that it wants. …

In the initial data the College Board has collected on some schools that have tried out the new tool, it found that disadvantaged students who did not attend high schools known to be regular feeders to college were more likely to be admitted, said Dr. Bastedo, who served as a consultant on the project. The tool’s impact on the admission of racial minorities has not yet been analyzed.

Oh, boy, this sounds like College Board president David Coleman’s umpteenth idea that sounded so brilliant in the boardroom (e.g., Common Core, New Slate-Flavored SAT) that he didn’t bother testing it before implementing it.

College Board officials said that the impetus for the adversity score had come from colleges. “It came from requests from our members, a good number of whom work in states that prohibit the use of race in admissions,” said Connie Betterton, vice president for higher education access and strategy at the College Board.

Ms. Betterton said the company had tweaked the formula after feedback from colleges: It had added, for instance, a stronger measure of “urbanicity and rurality.”

Speaking of 1990s comedy shows, “urbanicity and rurality” sounds like a line from In Living Color.

At this point, the adversity score is not reported to the test taker …