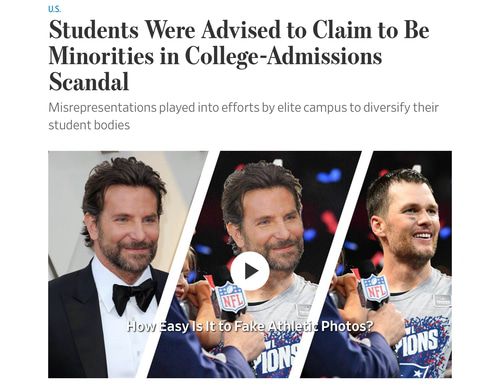 The man behind the scheme to help wealthy students get into elite colleges by cheating on tests and faking athletic credentials also advised some families to falsely claim students were racial minorities, exploiting the push to diversify campuses, according to two people familiar with the situation.
Students Were Advised to Claim to Be Minorities in College-Admissions Scandal, by Melissa Korn and Jennifer Levitz, Wall Street Journal, May 18, 2019

If  "White Privilege" were a real thing, wouldn't they be claiming white status?

A son of Marjorie Klapper, a parent scheduled to plead guilty Friday for participating in the scheme, was incorrectly listed on his Common Application as being black and Hispanic, the people said.

"Black and Hispanic"?  A double whammy.  More Pokemon points.  Well why not?

William "Rick" singer, the college counselor who has agreed to plead guilty in the case and is awaiting sentencing, also arranged for a proctor to cheat on the ACT admissions test for the teen, according to a Federal Bureau of Investigation affidavit filed in the case.

According to the scandal's own Wikipedia entry, Singer  was a "purported college counselor, and author of self-help books for college admission. Singer organized and sold fraudulent college admission services."  And it was working for years, until he got caught.

Ms. Klapper, who lives in Menlo Park, Calif., was one of many parents charged whose child was misrepresented as a minority, according to one of the people, who is familiar with the investigation.

Mr. Singer frequently gave families the option of misrepresenting race and would say that not doing so could put their child at a "competitive disadvantage," said one of the people, who is familiar with his business.

That's very telling. Singer, a professional counselor who was paid big bucks to get people into college, a person who definitely knew how the system works, said that just being white would put an applicant at a "competitive disadvantage".

Thanks for pointing that out, Mr. Singer.