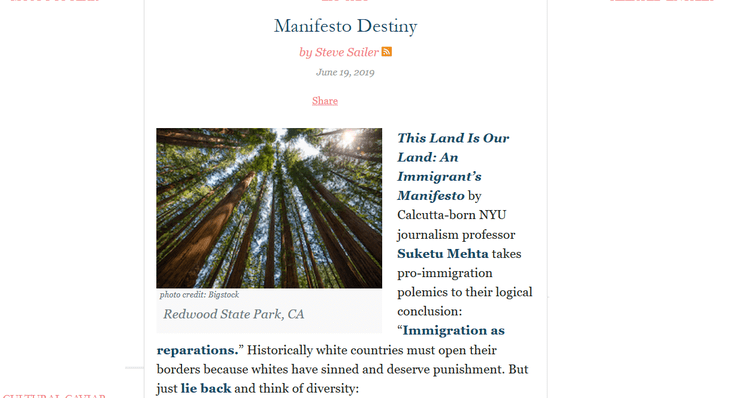 Sailer In TakiMag: Immigration As Vengeance

This Land Is Our Land: An Immigrant’s Manifesto by Calcutta-born NYU journalism professor Suketu Mehta [Email him] takes pro-immigration polemics to their logical conclusion: “Immigration as reparations.” Historically white countries must open their borders because whites have sinned and deserve punishment. But just lie back and think of diversity:

Indeed, a huge bill is coming due to the West. And it is one that the West is not only morally obligated to pay, but one that it should look forward to paying.

Mehta’s book is rife with anecdotes about deplorable white people saying insensitive things to his family. … He begins with a tale of which he’s particularly proud: An Englishman in London asks his grandfather why he is in his country:

“Because we are the creditors,” responded my grandfather, who was born in India…. “You took all our wealth, our diamonds. Now we have come to collect.” We are here, my grandfather was saying, because you were there.

Who wouldn’t want to let in more Mehtas? They sound like a delightful family, folks who definitely have your best interests at heart.

On the other hand, the author isn’t, technically, in Britain. He’s been living in the United States of America since his Gujarati diamond-merchant family arrived in Queens in 1977. As he sums up his manifesto:

I claim the right to the United States, for myself and my children and my uncles and cousins, by manifest destiny…. It’s our country now.

Of course, exactly why Americans merit vengeance for the sins, real and imaginary, of the British Raj isn’t fully explained in This Land Is Our Land. But that’s not the point; the point is that you white people have money, which means you are guilty, and therefore you must pay.