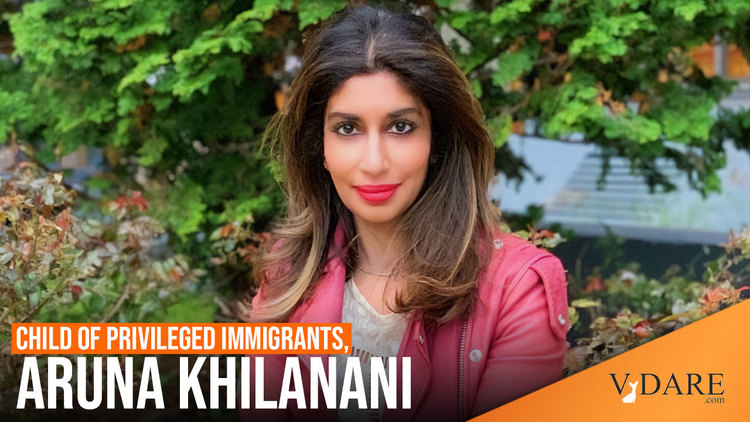 Aruna Khilanani, Child Of Privileged Immigrants, Hates The White People She Was Raised With

A New York City-based psychiatrist told an audience at the Yale School of Medicine in April that she had fantasies of “unloading a revolver into the head of any white person that got in my way.”

Dr. Aruna Khilanani spewed the race-hating virtual remarks — in which she also said she’d walk away from the shooting “with a bounce in my step” and that white people “make my blood boil” and “are out of their minds and have been for a long time” — at the Ivy League institution’s Child Study Center on April 6.

Audio of the talk was posted on the substack online platform of former New York Times opinion writer and editor Bari Weiss on Friday, along with an interview of Khilanani conducted by writer and podcaster Katie Herzog.

A flyer promoting the talk and posted online by Weiss titled the lecture, “The Psychopathic Problem of the White Mind” and included “learning objectives” such as “Set up white people’s absence of empathy towards black rage as a problem” and “Understand how white people are psychologically dependent on black rage.”

How did Dr. K [Tweet her] get to America? She was born in Michigan, where her parents, two Doctors Khilanani (Prem and Urmilla ) both 1960s graduates of Dow Medical College in Karachi, Pakistan, have been practising in Troy, MI for many years.

That means, as far as I can figure out, that she's one more unhappy result of the Immigration Act of 1965.

It turns out that Dr. K didn't go to school on the slightly mean streets of Troy, she went to the Detroit Country Day School, 11 miles away in Beverly Hills, MI, tuition currently $34,125, where she was class of 1994.

GreatSchools doesn't provide a racial breakdown for the school, but this promotional photo from Niche.com  gives you an idea:

However, sometimes the school prospectus writers will try to get all the blacks in the school in the recruiting photo.

After graduating from The University of Michigan with a Bachelor’s degree in English, Aruna Khilanani received a Master’s in English from the University of Chicago, where she focused on critical race theory, gender theory, Marxist critique, and post-colonial studies.  She is currently attending Medical School at the University of Illinois at Chicago as well as working at the show “Odyssey” on National Public Radio, a show that investigates the production of academic ideas and attempts to make them accessible to a mainstream audience. She hopes to pursue academic work at the juncture where medicine intersects race, gender, politics, sexuality, and class. She is heavily engaged in leftist politics and says she is glad and excited to run into DCD alumni at various talks and protests in Chicago, Washington D.C. and New York!

So why is this privileged, white-hating doctor like that?

Is it that she learned to hate white people by associating with them, or that she's copying the prep school, university, NPR SWPL types in hating themselves, with the added advantage that as a somewhat brown person she can claim genuine non-white privilege?

We don't know. What we do know is that the Immigration Act of 1965 was a mistake.