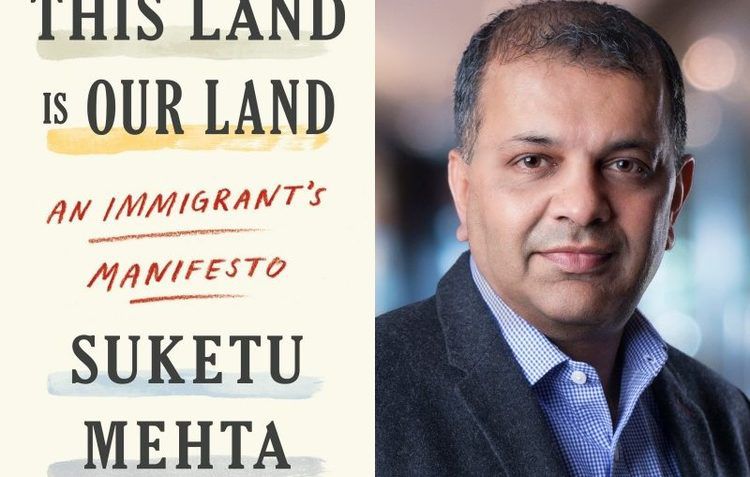 Suketu Mehta In The WASHINGTON POST: "I Am An Uppity Immigrant. Don’t Expect Me To Be ‘Grateful.’"

I am an uppity immigrant. Don’t expect me to be ‘grateful.’

I will not bow and scrape before my supposed benefactors. I am entitled to be here.

By Suketu Mehta
Suketu Mehta is an associate professor of journalism at New York City, and the author, most recently, of “This Land is Our Land: An Immigrant’s Manifesto.”
August 2 at 9:14 AM

In June, I published a book (“This Land Is Our Land: An Immigrant’s Manifesto”) arguing that immigration is a form of reparations. It drew forth a fusillade of hatred — on Twitter, in my inbox, under the rocks of 4chan and Reddit — suggesting that I return to India. One reviewer on Amazon called for me to be “skinned alive” and to go back to my “turd-world country.” Someone else tweeted, “This cockroach needs sent back to whatever s— hole he crawled out of.”

Meanwhile, University of Pennsylvania law professor Amy Wax, in a speech at the National Conservatism Conference, said I had argued that “immigrants should not join the mainstream or try and preserve and protect what makes America great, but should just take over from the ‘white power structure.’” (I’ve said no such thing, of course.) Wax accused immigrants like me of being culturally inferior: “Most inhabitants of the Third World don’t necessarily share our ideas and beliefs . . . Our country will be better off with more whites and fewer nonwhites.”

I’ve been told to “go back” ever since 1977, when I enrolled in an extravagantly racist all-boys Catholic school in Queens, N.Y.

But your parents whiteflighted you to the New Jersey suburbs after you got mugged twice on the street in NYC. For some reason, you didn’t have enough room in your book to mention the race of your multiple muggers.

— birthplace of President Trump, who recently became the biggest, loudest mouthpiece for this line of rhetoric when he tweeted that four congresswomen of color should “go back” to the “totally broken and crime infested places from which they came.” The idea is: White Americans get to decide who is allowed to come in and what rules we are to follow. If you come here, don’t complain. Be grateful we took you in. “Go back” is a line that’s intended to put immigrants in our place — or rather, to remind us that our place in this country is contingent, that we are beholden to those who came here earlier.

To this I say: No, we are not. I take my place in America — an imperfect place — and I make it my own; there’s a Constitution that protects my right to do so. I will not genuflect at the white American altar. I will not bow and scrape before my supposed benefactors. I understand the soul of this nation just as well, if not better, than they do: a country that stole the futures of the people who are now arriving at its borders, a cacophonous country, an exceptional country, but one that seems determined to continually sabotage its journey towards a more perfect union. Nobody powerful ever gave the powerless anything just because they asked politely, and immigrants don’t come hat-in-hand. I am an uppity immigrant. I am entitled to be here. Deal with it.

[Immigration as reparation for colonialism, climate change and corporate greed]

Should today’s migrants be “grateful” to the countries that caused them to move in the first place, the ones that despoiled their homelands and made them unsafe and unlivable? For example, in Somalia — birthplace of Rep. Ilhan Omar (D-Minn.) — the United States sent $1 billion to the dictator Mohamed Siad Barre, and the ensuing civil war quite literally blew up Omar’s childhood.

Uh, I’m betting that some of that $1 billion ended up in Rep. Omar’s grandpa’s pocket. After all, according to Rep. Omar, he worked for Siad Barre.

She should be grateful that her family had to escape their land and their people, and live in a tent in a refugee colony for four years? Rep. Rashida Tlaib (D-Mich.) should be grateful that her parents had to leave the West Bank and seek shelter in the country principally responsible for backing (and sending billions annually to) the government that occupies their hometown?

After all, Rep. Tlaib practices a religion, Islam, that has no countries of its own, so of course Muslims must migrate to their Great Oppressor.

… The West has despoiled country after country through colonialism, illegal wars, rapacious corporations and unchecked carbon emissions. And now their desperate migrants are supposed to be grateful to be let in by the back door at the mansions of the despoilers, mansions built with the stolen treasure of the migrants’ homelands?

Uh, Prof. Mehta is from a subcaste of Gujarati diamond merchants. I’m sure he could explain at length why he deserves to be here due to how George Washington oppressed his subcaste, although I didn’t notice him actually mentioning it in his book.

… I claim the right to reside here by manifest destiny, for myself, my cousins and uncles and children.

It’s all about cousins.