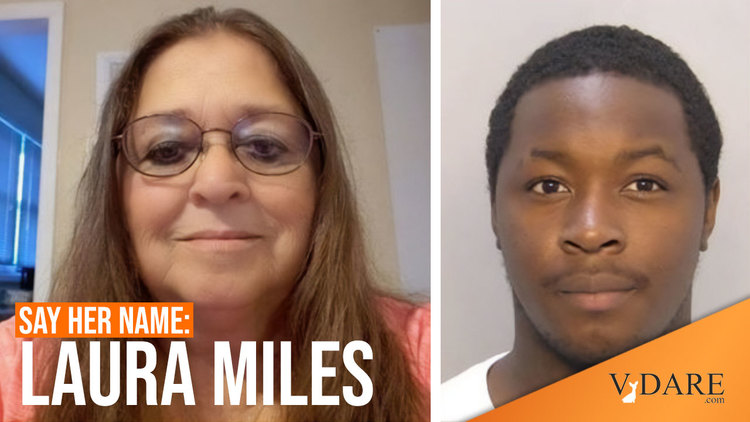 Her Name Is Laura Miles: While Speaking With Husband On Phone, White Woman Abducted And Murdered By Black Male

No words. Because if white privilege, structural inequality and implicit bias were true, Laura Miles husband would never have had to heard her scream.

Laura Miles was a white woman. Her abductor and murderer is a black male.

Husband of woman killed in Chesapeake heard struggle on phone before her abduction, court documents say, Virginian Pilot, May 25, 2021

The day she disappeared, Laura Miles had been on the phone with her husband when he heard her scream, court documents say.

The husband then heard a struggle, and the call disconnected. When he tried repeatedly to reach her again, she didn’t pick up.

Miles’ husband called police, triggering a search for the 61-year-old and ultimately the discovery of her body in a wooded area in Western Branch.

Search warrant documents recently filed in Circuit Court shed new light on Miles’ disappearance and death. Among detectives’ findings: Cherry had been staying at an apartment several hundred feet from where Miles was abducted, and his fingerprints were found on her pickup truck, police wrote in court documents.

Details from the warrants were first reported Tuesday by WVEC.

On May 17, officers were called to Miles’ apartment in the 3500 block of Clover Road for a possible abduction. Miles’ husband told police that after his wife didn’t pick up his repeated calls, he started getting unusual text messages from her phone, police wrote in a search warrant affidavit.

He got a text “claiming she was okay,” but Miles “only writes ok when using that word,” police said. Miles always ended a conversation saying she loved her husband, but that day, she didn’t text that.

Officers found Miles’ vehicle parked on the opposite side of the apartment complex. Blood drops and smear marks could be seen in the back of the tail bed, police wrote in a search warrant affidavit.

Later that day, Miles was found dead with several stab wounds in a wooded area in the 4600 block of Taylor Road, less than half a mile from her apartment building.

Police searched Miles’ Ford F-150 for forensic evidence. Her keys and cellphone weren’t inside, but police found Cherry’s fingerprints on the vehicle, a detective wrote in a search warrant affidavit.

The detective reviewed surveillance footage, which showed a man wearing a plaid shirt, camouflage head covering and black slide-on shoes enter the breezeway of an apartment building a few hundred feet from where Miles was abducted roughly 20 minutes before her disappearance. He had a cellphone in his hand and walked around the parking lot, the detective wrote.

Two other detectives contacted Cherry and went to interview him in the 3300 block of Pampus Lane — near where Miles disappeared. Cherry said he’d been staying at that apartment with his girlfriend for the past few weeks.

Police obtained warrants to search Miles’ and Cherry’s apartments and to get a swab of Cherry’s DNA.

Cherry moved to the area from Richmond in March and had started a new job at McDonald’s three days before his arrest, according to court documents.

After his arrest, a magistrate had to determine whether Cherry qualified for bail. The magistrate warned Cherry anything he said could be used against him in court.

Asked if he had anything to say about bail, Cherry “advised that he participated in the alleged crimes,” according to court documents.

Cherry is scheduled to appear in court for a preliminary hearing Aug. 11.

Did you hear about that happened to Mrs. Miles? Her husband did, as she was on the phone with her. Instead, all you heard about was something that happened in Tulsa, Oklahoma over 100 years ago, when black people targeted whites for murder.

Rest in peace, Laura Miles. Were white privilege real, we’d all know your name. We’d all know how your husband heard you abducted by a black male as he spoke with you on the phone.